Nobody does it better

A pre-Christmas party for top hoteliers and restaurateurs, lavishly hosted by the Crus Classés des Graves, provides a moment of marketing magic for Bordeaux wines. 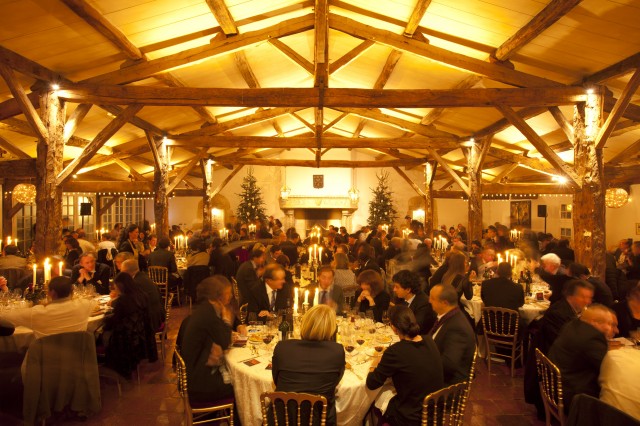 In a former life I was a somebody.  As claret buyer for one of the UK’s oldest and smartest importers I was invited to all the top tastings and events, all very jolly affairs.  The owners of Bordeaux’s crus classés really do know how to throw a good party: the venues – the châteaux – are of course to die for, and the culinary expertise required in serving perfect gourmet meals to hundreds at a sitting does not come cheap.  And then there’s the wine bill.  The cost of marketing a top wine brand, relative to the potential profitability, is astronomical.

Consider wine compared to almost any other luxury product, say, a handbag or a watch.  At the customer end the selling price of each is capped by what the market will bear, but on the production end the wine is limited to one harvest per year from a fixed vineyard area, whereas a handbag or watch maker experiencing high demand can simply produce more, hence more profit and so more marketing budget.

So it makes a lot of sense for Bordeaux’s producers to share these costs, clubbing together to promote their region or their appellation, and groups like the Union des Grands Crus de Bordeaux, and the Union des Crus Classés des Graves, can afford not only to organise some powerful promotional events at home – if you’ve ever experienced the annual Fête de la Fleur, you’ll know what I mean – but also to set off around the world each year, banging the drum (and the dinner gong) for Bordeaux’s finest.

While the UGCB tour now takes in dozens of cities in Europe, America and Asia, and this year even took in Africa for the first time with a tasting in Douala, Cameroun.  The Crus Classés de Graves has also been very active in 2013, with a world tour to promote the organisation’s 60th anniversary, and it was back at home that I caught up with them this week for a sumptuous dinner at Château Smith Haut Lafitte.

This Union was formed long before the new Pessac-Léognan appellation was born in 1987, and this is why all 16 crus classés (they can be classified either for their red wines or their white wines, or for both) are in fact now in AOC Pessac-Léognan whereas the grouping is called Graves.

Florence and Daniel Cathiard are famed for their skills as dynamic hosts and the evening was jovial, seasonal with English carols, and at one point almost raucous, as the lights dimmed and the huge yule log was paraded around the room on a sleigh borne by all our hosts, turning a very sharp corner around our table and teetering dangerously in my direction!  The food was outstanding: caviar, foie gras, truffles and more, and we were utterly spoilt with a grandiose wine offering all served en magnum.

The theme was the annual accabaille party to celebrate the end of the harvest and winemaking, when the Graves châteaux like to invite their faithful hotel and restaurant customers to enjoy a quiet moment in the calendar.  Most were French, a roll-call of the nation’s leading establishments, but at our table were a couple from a small luxury hotel in the depths of Nova Scotia, charming quiet people for whom I think the evening was really quite an eye-opener, and this really got me thinking.

I never questioned the validity of spending such amounts on me in the past because I signed the PO’s for the en primeur purchases we made and some of these were pretty big, so the link was a direct one and the return on investment was tangible, (even though I ordered through négociants and not direct from the châteaux).  But as the Bordeaux grapevine extends its tendrils out across the globe and connects directly with more and more of the people who serve and consume the wines, some only in tiny quantities for now, the marketing takes on a magical power.  To be visited in Africa, or to be invited from rural Canada, and to establish a personal contact with the people who make the wine you sell, must be an incredible experience which creates a lasting bond with the property and the wines of Bordeaux in general.  But how do you measure the results of all this work, the return on investment?

The answer cannot be in the figures, because the sale is far too removed from the event, so it must be in the feeling, the long-term love of the product, the warmth associated with Bordeaux wines that could, should, last a lifetime.  And this is the marketing magic of Bordeaux, the special relationship, if you like, with so many people in so many places around the globe, that when they want a special bottle, something to celebrate a particular moment, Bordeaux is their first choice.