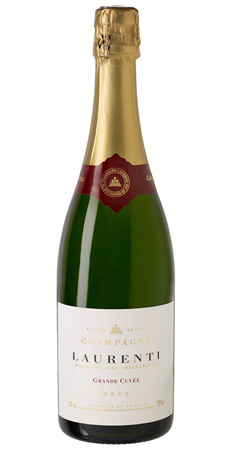 The Grande Cuvée is one of three Laurenti Champagnes to have launched in the UK. Each wine in the collection contains less than 10 grams of sugar per litre and are also very low in sulphates, which, the producer says, “gives them a smoother taste and less chance of a hangover”. The Grand Cuvée is a blend of Pinot Noir and Chardonnay and has been aged for three years in the Laurenti cellars. 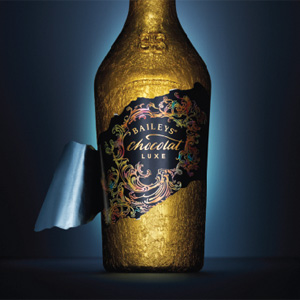 Baileys Irish Cream Liqueur has launched Baileys Chocolat Luxe. Taking over three years to create, the new blend brings together alcohol, Madagascan vanilla and over 30 grams of real Belgian chocolate per bottle. The product has been created by Anthony Wilson, principal scientist and son of one of Baileys Original Irish Cream’s creators Steve Wilson. Commenting on the creation, he said, “The philosophy behind developing Baileys Chocolat Luxe was to create an ambient molten chocolate experience – something that you could pour and drink at room temperature that would have the multi-sensory experience of eating chocolate.”

According to Wilson, it was the smallest of changes that provided the momentous breakthrough after 839 failed attempts. Lowering the alcohol content by just 1.3%, the flavour of the whiskey finally complemented, rather than overpowered the chocolate.

Baileys Chocolat Luxe is available at Harvey Nichols in the UK and is now being launched in global travel retail outlets. 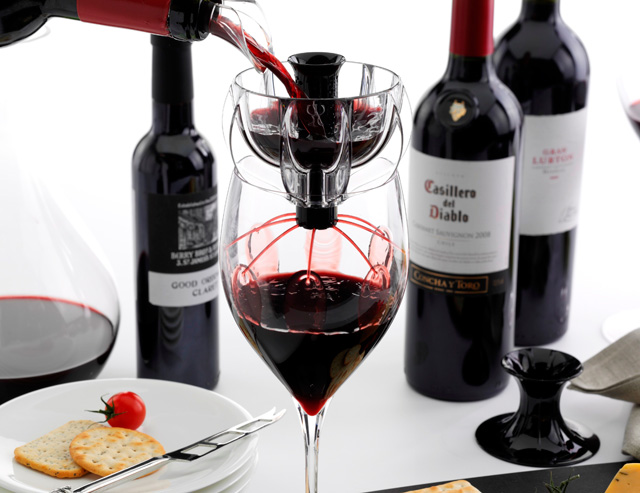 Designed to improve, filter and aerate wines, the WineWeaver is a product specially developed to“unlock” the “hidden flavours” in wine, particularly tannic red wines. With a lightweight design, the WineWeaver is safe for direct contact with fine stemware and decanters, leaving the user’s hands free for pouring.

Endorsed by Christopher Delalonde MS, winner of the UK Sommelier of the Year award, who attests that any “flavours, aromas and character” in the wine will be heightened in the aeration process.

Celebrating the brand’s blue colour, each bottle of Absolut Originality contains a drop of cobalt blue released as a colourless liquid into the glass at 1600°C. As the glass cools off a unique blue infusion appears inside the glass of each package. “Absolut Originality presents our iconic bottle in its most classy form to date,” says Mathias Westphal, global brand director at The Absolut Company. “We took inspiration from traditional Swedish glass-craft, and made it available to the world. When we watched a drop of cobalt sink into the hot glass the first time, we didn’t know what it would look like. But the very first bottle looked amazing, and what started as a playful experiment ended up as four million one-of-a-kind pieces of art.” 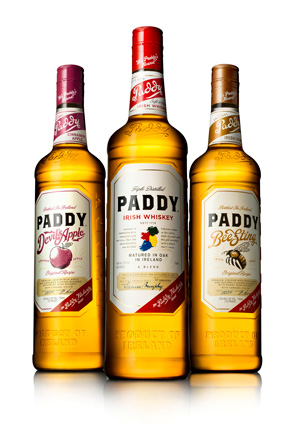 Irish Distillers has unveiled four flavoured editions of Paddy Irish Whiskey – joining Bushmills Irish Honey in the burgeoning flavoured Irish whiskey market. The brand’s Bee Sting and Devil’s Apple flavours initially launched in the US during October, while the Irish Honey and Spiced Apple flavours hit the shelves in France during the same month

Flavoured whisky has become one of the fastest-growing spirit categories of the past year, with Beam (Jim Beam Honey, Red Stag), Brown-Forman (Jack Daniel’s Tennessee Honey), Diageo (Bushmills Honey, Crown Royal Maple Finished) and Campari (Wild Turkey American Honey) all vying for space in key markets of the US, UK, Germany and Australia.

To coincide with its own releases, Pernod Ricard has also given its core Paddy Irish Whiskey blend a packaging overhaul.

De Bortoli Wines have added a new blend to their Deen Vat Series label called the 184 Master Blend. Using fruit from the 2010 vintage, the blend is made up of Durif (50%), Shiraz (32%) and Petit Verdot (18%). The wine was aged for 12 months in American oak barrels, 15% in new oak and the remainder in one to four year-old barriques .

Deen Vat 184 Master Blend is available exclusively to independent merchants and regional wholesalers in the UK.

The Deen Vat Series wines were originally created by Deen De Bortoli with the idea of developing a range of “delicious, full-flavoured wines” at an affordable price”. 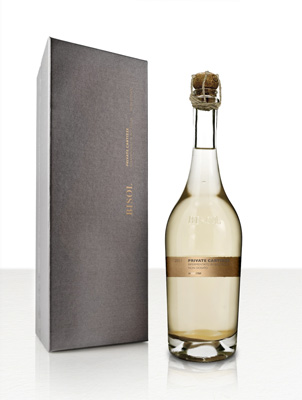 Bisol has created a limited edition Prosecco from the Cartizze sub-region of Valdobbiadene. The product is made without the addition of sugar and, unlike standard Prosecco, the wine undergoes a secondary fermentation in the bottle. The sparkling wine spends 11 months ageing on its lees before disgorgement. “We have finally reached our most ambitious aim and are able to offer an in-the-bottle secondary fermentation version of the apex of the Prosecco pyramid of quality,” said Gianluca Bisol of the new product.

The Cartizze sub-region is a 106 hectare area covering the steep hills of Valdobbiadene. A single hectare in this prized zone costs as much as E2.5 million according to Bisol. Harvesting of the grapes for Bisol’s Private Cartizze is carried out by hand. 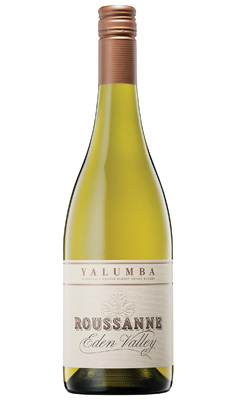 Yalumba has championed Viognier since 1980, but has now released its new version of another great Rhône white variety, Roussanne. The 2012 Roussanne was sourced from two vineyards out of the Eden Valley. The first is the Vaughan’s which was grafted in 2007, from Cabernet and Riesling. The second is Yalumba’s Eden Valley vineyard which was planted in 2008 and 2009. This wine is described as having “aromas of wild pawpaw, white fleshed peach, vanilla custard, cumquat and hints of tea rose.” The palate is “silky yet defined, with stone fruit layered over fresh grapefruit acidity and a fine powdery texture.” 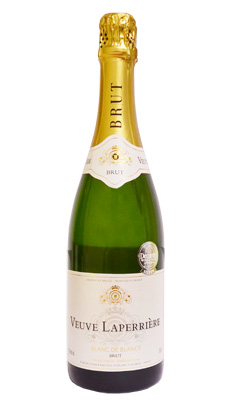 Veuve Laperrière sparkling blanc de blancs is made from white grapes Chenin Blanc, Chardonnay and Ugni Blanc and will be available at UK supermarket Morrisons from this month. A pure Chardonnay and a rosé will be soon added to the Veuve Laperrière range in the UK off-trade. The brand is from the Maison Ackerman stable of wines, a company which has the largest share of Loire AOP sparkling wines. Ackerman is also launching two new Crémant de Loire cuvées: the cuvée 1811, referencing the company’s foundation year, and made using a blend of Chenin, Chardonnay and Cabernet Franc; and a cuvée blanc de noirs, using Cabernet Franc, Grolleau and Pinot Noir. Ackerman +33 2 41 53 03 10 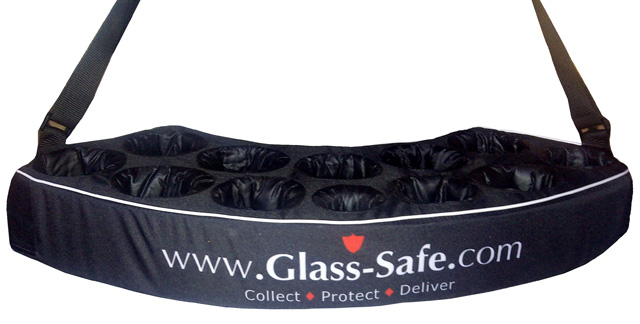 The prospect of a tray slipping from a staff member’s wet hands and showering customers in broken glass could be a thing of the past with the launch of a new product called Glass-Safe.

Made from the same canvas material as a modern day sports bag, and strengthened inside with the use of tough polystyrene, Glass-Safe is designed for the safe transportation of various sized beer and wine glasses, and also bottles.

The unit has a strap that fits over the head and is moulded to fit the body. It comes with an adjustable waist belt, leaving the hands of the bar staff free. The ‘tray’ concept features expandable inserts, engineered to secure glasses and bottles. The manufacturers claim that Glass-Safe is light, compact, robust, washable and easily manoeuvrable around the body, meaning it is easy to get through doorways and tight spaces, which all makes it safe and practical. Glass-Safe trays can be purchased at www.Glass-Safe.com.