Since their 2011 peak, Lafite and others in the Rothschild stable have dropped back to their 2010 levels, prices falling over 40% in the process. 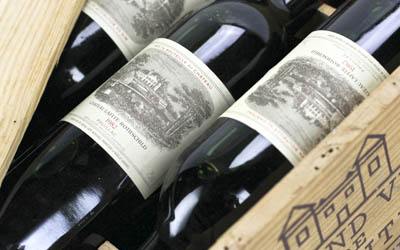 According to Liv-ex, Lafite, its second wine Carruades and Duhart Milon peaked in February 2011 and since then have slumped dramatically.

The biggest fall was experienced by Carruades, which has seen its prices tumble just over 46% in the last three years and has previously been shown to be one of the worst performing second wines of late.

Duhart Milon has dipped by 44%, while Lafite saw a particularly steep fall in 2011 when its bubble burst although it has levelled out somewhat since the end of 2012, a 39.9% drop in total.

Lafite’s slow downfall is partly linked to the slow down in China and the crackdown on luxury gift giving between state officials.

As was shown previously, even the 2009 vintage now trails fellow first Latour.

Another important aspect of the turnaround in Lafite’s fortunes is the widening of the market to other labels in Bordeaux, particularly on the Right Bank, as well as to Burgundy, Champagne, Italy and even Napa.

Lafite and Carruades are now sitting around their February 2010 price levels, while Duhart has settled at its June 2010 level.

Prices appear to have stabilised somewhat for now but, asks Liv-ex, “do they still have further to fall?”