Hindenburg beer up for auction

A slightly scorched bottle of beer salvaged intact from the wreck of the Hindenburg zeppelin is to be auctioned in the UK this week for £6,000. 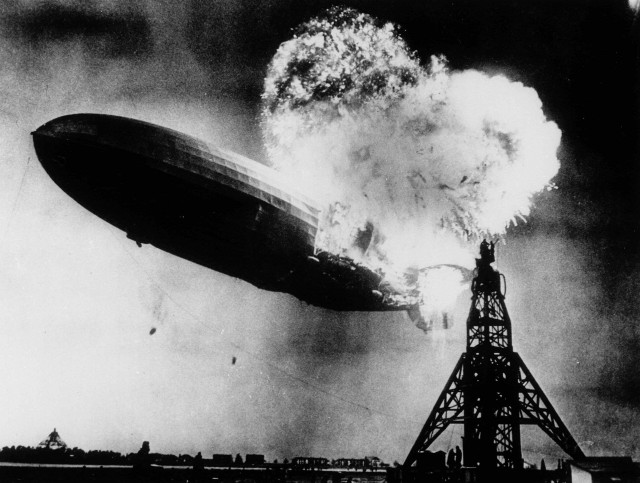 The bottle, thought to be from the Löwenbräu brewery, is to go on sale alongside other Hindenburg items at Wallis and Wallis auctioneers in Lewes, East Sussex on Wednesday.

It is claimed that the beer was one of a pack of six discovered by a fireman. Leroy Smith, at the scene of the stricken craft which he buried and later recovered.

He kept one for himself and shared the other five with friends. One of the bottles subsequently found its way in to the possession of David Kirch from the UK, a collector of Hindenburg and other airship memorabilia, in 2009 when he bought the bottle from Wiltshire auctioneers Henry Aldridge and sons.

The Wallis auction catalogue describes it as: “Fire damaged Lowenbrau larger rescued from the remains of the Hindenburg. A standard size green bottle 23cm fitted with a crown top. The bottle is unopened but the label is scorched and damaged from the fire and the top foil is long gone.”

The bottle will be sold alongside a “piece of material”, also from the Hindenburg, a strip of the German flag and a letter home from the secretary to the German Consulate in New York at the time, Karl Loerky.

Loerky’s letter was written to his father some time after the crash and describes the scene of the tragedy as well as his time among the survivors of the crash at Lakehurst.

Also included in the letter are two photographs, one of Loerky in front of the wreckage and another with a pack of 12 Löwenbräu which shows that many bottles did survive the crash.

The widow of one fireman gave a bottle back to Smith in the 1970s and he donated it to the Löwenbräu brewery where it remains to this day.

Nearly 600 items in his collection including the Hindenburg’s passenger list and letters from the first lady to fly around the world in an airship, Lady Grace Drummond-Hay, are also to be sold.

It is the fifth part of his collection to be sold, the previous auction having raised £211,000 and the collection as a whole is expected to raise £1 million.

The Hindenburg disaster happened on 6 May 1937 when the enormous airship tried to dock at Lakehurst in New Jersey.

While docking the Hindenburg suddenly erupted in flames – for reasons still debated to this day.

Thirty-five of the 36 passengers and 61 crew became casualties, as did a member of the ground staff.

Moreover, the incident grew larger in the public eye because of the photographs (see above) and newsreel footage taken and also the eyewitness radio coverage given by Herbert Morrison who kept reporting throughout and coined the famous line, “oh the humanity” as the zeppelin collapsed into inferno.