Wine producers are still trying to discover which grapes work best in the Okanagan Valley and how to exploit the region’s potential. 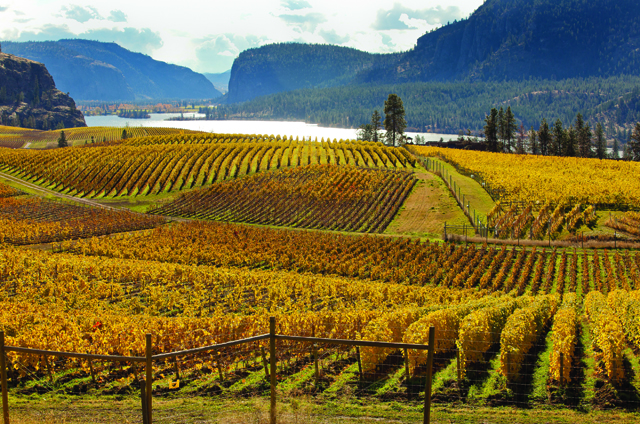 THE POPULAR image of Canada is of a land of icy tundra in the baleful grip of perma-frost all year round – in contrast with the sun-drenched US. Therefore, it might surprise some people to learn that one of Canada’s foremost wine regions alongside Niagara is, in essence, a desert.

The Okanagan is not the only wine region in western Canada. Indeed, British Columbia can boast small industries in the neighbouring Similkameen Valley, Fraser Valley on the approach to Vancouver and a few vineyards on Vancouver Island too, with other parts of the province being eyed up for future plantings as well.

It is a region that defies convention too. At 50° latitude it is at the very limit of northern hemisphere winemaking and despite, or in fact because of that, it has the most hours of summer sunlight of any vineyards in North America. Its southern half – as mentioned – is the northernmost tip of the Sonoran Desert which runs up from Baja, Mexico and sees 320mm of rainfall per year and daytime temperatures that regularly touch 40°C – but which also plummet to 20°C at night.

Lying between the Coastal and Monashee ranges, the whole valley is lying in a rain shadow and with more moderate temperatures in the northern half of the valley (there can be 4°C difference in temperature between Kelowna and Osoyoos) it can justifiably claim to be a cool climate region.

The valley is made up of a series of lakes, with Okanagan Lake in the north the largest at 135km long, while in the south is Lake Osoyoos with lakes Vaseaux and Skaha respectively in-between. All are linked by the Okanagan River which flows into the US and joins the Columbia River in Washington State.

With such diverse but agreeable grapegrowing climates the valley, like Barossa, can produce Cabernets and Syrahs alongside Riesling and Pinot Gris. The Okanagan is certainly an emerging region of note. On the other hand, as the Okanagan comes of age these advantages also throw up some challenges. With so many grape varieties is there any one which represents the Okanagan? Does a signature grape need to be elevated above the others or is it a region that, like Chile, is a master of many? And with its small size will it ever be more than a curiosity in the wine world? Are its high prices always justified? Does it need to expand and should producers seek to create export markets?

TO FOCUS OR NOT TO FOCUS?

Quite how many varieties are planted in the Okanagan at present would be hard to say. Okanagan wine veteran and owner of Time Winery, Harry McWatters, says, “We have 60 viable varieties, we can’t focus.” On the contrary thinks Sandhill’s master winemaker, Howard Soon: “Pinot Gris is going to be the buzzword for BC wines. We have too many different varieties.”

On the other hand, Soon is a great proponent of single vineyard wines (which is all Sandhill does), including tiny plots of Malbec, Syrah, Viognier and Sangiovese. The real problem is size. Ezra Cipes, CEO of Summerhill, or the “Pyramid Winery” as it’s often known thanks to a tetrahedral barrel room, sums it up perfectly: “The size of the viticultural area is small,” he explains.

He continues: “The Pinot Gris and Blanc are good, producers here have a good handle on them and it’s hard to find a dud but we’ll lose our shirts trying to sell it at CA$12.95. It’s not economical – the cost of labour and taxes are too high.”

Funnily enough, although Chardonnay plantings have declined in favour of Pinot Grigio and other varieties, both Gina Gallo and Neil McGuigan recently told the drinks businessthat they saw the Okanagan as a Chardonnay producing region of note.

“There’s always been a discussion about one grape but there’s never a consensus,” laughs Jak Meyer, founder of his eponymous vineyard. He explains: “We can do many but I think what does well are the aromatics and Pinots.” Mission Hill’s director of wine education, Ingo Grady, however, comments: “It’s not about a single grape or even two or three. This valley is as exciting as any other in the world. We have the right climate too: eight weeks of no rain – we’re both cool and continental.”

“We have longer daylight hours than Napa,” agrees Tyler Galts, chief operations officer for Quails’ Gate. He goes on to say: “We can ripen 14 varieties if we want but you can’t be half-assed with your viticulture here, it’s not as forgiving as Napa.” With the surge in planting that followed the rise of the wine industry in the region between the 1960s and 1980s, the chief challenge for many is finding which varieties are consistent in which spot.

The typically outspoken McWatters declares: “We have a lot of really good vineyards and a lot of different soils and micro-climates. But I think there are people planting grapes where there should be no grapes and some are planting with the wrong sort.” With this latter statement McWatters is particularly scathing about those people who keep a plot planted with a variety which only ripens fully at irregular intervals.

On the other hand, he is willing to concede: “People are pushing the envelope in sites I didn’t think they could be successful – and they have been.” Five broad sub-regions have already been identified (see box out on p61). With these in mind, it is possible to reduce the Okanagan to a quick mantra: hot south for reds, aromatics in the cooler north and some like Pinot Noir, Chardonnay in the middle – with the occasional Syrah or Petit Verdot if they’re planted on the eastern side of the valley which gets the most light.

Cipes also sees the transition as inevitable. “People will figure it out,” he predicts. “Cedar Creek is taking out their Merlot in Kelowna for example. The grapes will find their place eventually.”

Let’s return once more to the issue of the size of the Okanagan Valley and, to a point, its associated costs. As a small, niche wine region it is unsurprising that few outside of North America or the most well-informed trade are aware of its existence. Indeed, the bulk of British Columbian wine is drunk within the province and the majority of that is consumed in Vancouver alone.

Jane Hatch, general operations and sales at Tantalus, explains: “BC drinkers are extremely loyal to BC but there’s only so much they can drink.”

Meyer for one is fully convinced that export needs to be pushed further. Currently he exports around 5% of his production, which amounts to 100 cases outside Canada and another 100 to other provinces. “In the longrun you need to get out of BC,” he argues, declaring: “It’s shortsighted to think you’ll get a better price here.

I don’t want to be the last guy trying to export, I want to be the first.” Others are more wary. Cipes mentioned before that it is very difficult for most wineries to produce enough wine at a low enough price to be really competitive in an export market.

High labour and taxes mean that some wineries are having to charge $40 for a wine that should really be $20. It’s not that the wine isn’t good enough, it’s just that there are others which offer better value for money.

Ian Mavety of Blue Mountain Vineyard, cautions: “I think it would be foolish to have a $50 BC wine on the shelves when there’s comparable quality from elsewhere. It’ll be a hard second sell.”
So might it be necessary to plant more vines? “This region is not going to grow substantially,” thinks Grady.

But that doesn’t mean it can’t or won’t. McWatters is adamant, although also realistic, about what needs to be done, arguing that growth is necessary to get more Okanagan wine to a wider audience. “It’s necessary for us to grow as we’ve had acclaim from writers but not consumers.

“There’s still room for growth though we couldn’t double in size.” Crucially he adds that any future planting would “have to be site specific”. One final strength of the valley and a factor that may be instrumental in finally growing the vineyard area is tourism. With its relatively manageable size, wineries equipped with renowned restaurants and also a thriving industry in Kelowna and Penticton for water sports and other outdoor pursuits, the Okanagan is an increasingly popular place to visit.

Grady reports that Mission Hill sees around 80,000 visitors a year, and Quails’ Gate receives 120,000 according to Galts. “There’s been a real change in the last 10 years,” says Christie Mavety of Blue Mountain. “There’s always been a real draw to come to the Okanagan but there’s more now with the wine. Tour companies have been set up and there are better restaurants that add to the area.”

An indication that the region is growing, fuelled perhaps by tourism, is the fact that since 1992 the number of wineries has grown from around 6 to 200. So where does that leave the valley? There are some teething issues which are only natural for a region that is emerging and finding its place. The wines are expensive and any export market will have to be extremely selective. As Galts points out, “We have to aim at the ‘real’ wine consumers.”

On the other hand, there are many positives. The overall quality of the wines is very high, there are winemakers who are becoming old hands at their craft and there are newer producers who are doing exciting work. The vines too are getting older, planted in the right place and there are tentative signs of sub-regionality.

It is true, some wines are over-priced but there are others which perfectly justify their price tag. If a sommelier or independent merchant picks carefully and has clients that enjoy good wine and are prepared to spend money on it, there’s no reason to doubt that the Okanagan can take its place on the tables and in the cellars of wine enthusiasts beyond BC. 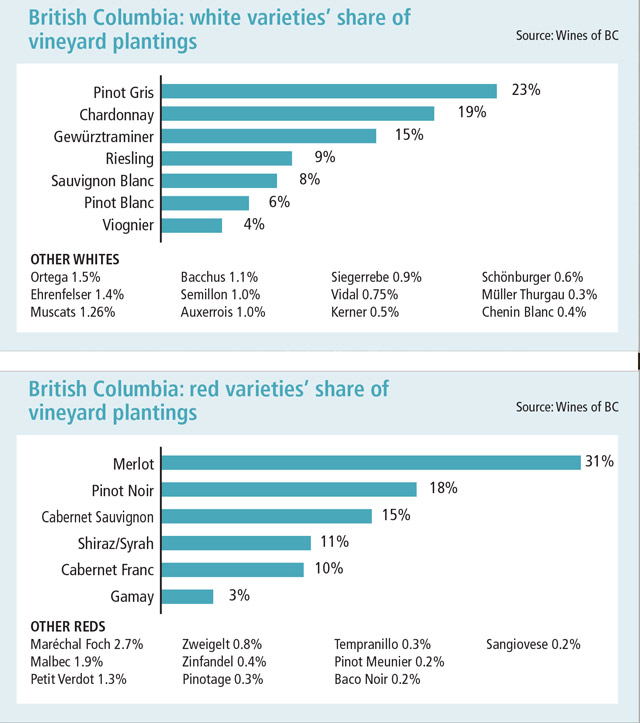