An Italian father and son have been arrested on suspicion of counterfeiting €2 million worth of Domaine de la Romanée-Conti. 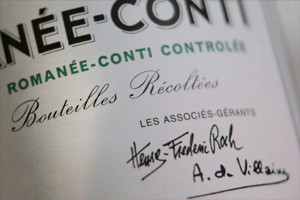 The pair, believed to work in the wine trade, were arrested on 16 October in the course of a Europol operation spanning, Germany, the UK, the Netherlands, Cyprus and Italy.

According to Agence France Presse, Dijon’s public prosecutor, Marie-Christine Tarrare, announced on Monday that, “at least 400 bottles of wine were fraudulently sold for a sum of around €2m.”

In total 20 homes and warehouses were raided, with seven people arrested and interviewed. In the home of one of the Italians counterfeiting materials were discovered.

The investigation began late last year at the behest of the famous Burgundian estate, when it filed a complaint about fake wine in circulation.

An examination of 69 bottles seized by police confirmed the existence of counterfeit wines, tests in Montpellier concluding that the wines confiscated were, “of mediocre quality, with very poor sensory qualities, and were a blend of several wines of indeterminate origin.”

Tarrare added the investigation is ongoing and that it is, “not possible to say precisely how many fake bottles are in the market.”

It was not revealed which vintages in particular had been counterfeited although French news station France 1 mentioned the fabled 1945 vintage. A legendary vintage throughout France, the ’45 is particularly sought after from DRC because of a severe frost which drastically reduced the crop making it exceptionally rare.

French authorities have called for the extradition of the two Italians who face a maximum of 10 years in prison if convicted.

The case comes as Hong Kong millionaire Henry Tang has launched libel proceedings against US lawyer Don Cornwell who said that some of the DRC he consigned to a recent Christie’s auction were fake.

DRC is one of the most prestigious estates in France with single bottles selling for tens of thousands of dollars at auction.