Balblair Highland Single Malt is releasing three new vintages, with a 1983, 1989 and 2003 all set for the market next month. 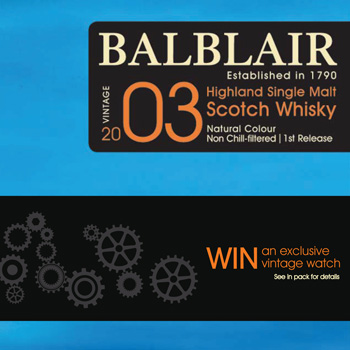 The three vintages are set for bottling on 20 October, ahead of their November release. To mark the launch Balblair will be giving consumers the chance to win a luxury vintage watch worth £3,500.

The UK only promotion will run from November to the end of January and will be featured on 70cl bottles of the Balblair 2003 vintage.

Gillian Gibson, global brand manager of Balblair Single Malt Scotch Whisky said: “We wanted to celebrate the launch of the 2003 vintage and reward our loyal customers by giving them the chance to win a little something extra in the lead up to Christmas.

Balblair is released in vintages as opposed to age. We are giving away a luxury vintage watch as it is a brand that we feel has the same synergies as Balblair, luxury and style.”

All three of the new vintages have been matured in American Bourbon oak casks, with the 1990 also spending some time in Spanish oak ex-Sherry butts.

Established in 1790 Balblair is one of the oldest distilleries in Scotland and releases its whiskies by vintage, distinguished by the year the whisky was laid down, rather by an age statement.