Beam Inc has launched its first-ever global marketing campaign, which will be entitled “Make history”, for its flagship Jim Beam Bourbon brand. 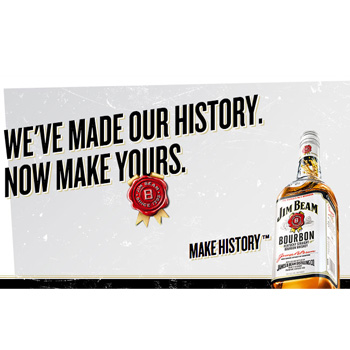 The campaign will start at the end of this year in the US and Australia before being rolled out to more than 100 market around the world over the next nine months.

“As the world’s number one bourbon whiskey, Jim Beam has been making history since 1795,” Matt Shattock, president and CEO of Beam Inc, said in a statement.

“We’re excited to announce the launch of ‘Make History’, the first truly global advertising campaign for Jim Beam. This multi-year campaign reflects sharp global consumer insights, substantial investment in the continued growth of our flagship brand, and our sustained commitment to the attractive and fast-growing bourbon category around the world. ‘Make History’ is a big brand idea that resonates with consumers across global markets.”

Beam is hoping that the new campaign will inspire its customers to go out and make some of their own history.

Kevin George, Beam’s global chief marketing officer said: “Make history is a call to action to consumers to be inspired by the legacy of Jim Beam to go make some history of their own, be it a memorable night out with friends or putting their stamp on the world as they pursue their dreams.”

In 2012 Beam sold more than seven million cases worldwide and figures have shown increased sales for the first half of this year.