Drappier has submerged 50 cases of Champagne in the English Channel to study the effect of the tide and water pressure on Champagne maturation. 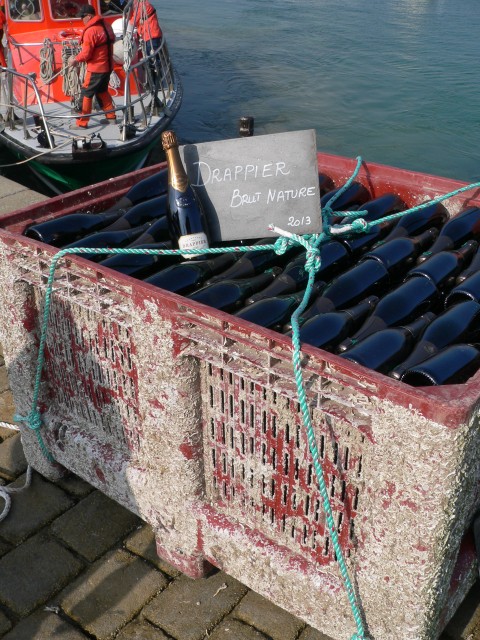 As many as 600 bottles of Drappier Brut Nature and 60 bottles of Grande Sendrée 2005 were lowered into Brittany’s Saint-Malo bay earlier this month, and will spend one year ageing in the sea at a depth of 17 metres.

Head of the Champagne house Michel Drappier told the drinks business that he was inspired to place the bottles in the sea by a Drappier customer in Saint-Malo called Yannick Heude, who runs a wine merchant in the coastal town called Cave de l’Abbaye Saint-Jean.

According to Michel, Heude has been submerging a range of French wines into the sea for a number of years and assessing the impact on their development.

Among these experiments has been one Champagne – Louis Roederer’s Brut Premier – and Michel told db that he was impressed with the results.

“From what I’ve seen the Champagne tastes better,” said Michel, having tried the Roederer one year after it was submerged in the Saint-Malo bay in May 2009.

Due to the water’s depth and the sandy sea floor Michel said that the environment is dark enough to ensure there is no risk of light damage, while he noted that the temperature is a constant 9-10 degrees Celsius.

Importantly, there is also a tidal influence that moves the bottles gently under the water, which Michel said accelerates the maturation process.

“The movement of the tides means there is a nice evolution, the wines mature faster but also better,” he said.

A further factor is the high pressure exerted on the submerged wine, although Michel assured it was not greater than the 6-8 bars inside the bottle, and there was no danger of sea water entering the Champagne.

He noted that a higher external pressure should have a beneficial influence on the Champagne, and that sparkling wines aged at lower pressures, for instance in high altitude mountain locations – even if kept cool – don’t age well.

Following previous tastings of wines matured in the bay by Yannick Heude, Michel said acidic white wines perform best, and fragile reds the least well and, as a consequence, he believes his Champagne will age well under the water.

To test the results Michel has kept a stock of identical bottles that were disgorged on the same day at his cellars in Champagne so he can compare these with the submerged wine when it is brought back to the surface in June 2014.

And once the Champagne is retrieved, Michel plans to sell the majority of the bottles at an auction to raise money for France’s Société Nationale de Sauvetage en Mer (National Society for Sea Rescue).

He also said he might retain some bottles for a comparative press tasting to look into the differences between the Champagnes aged in his cellars and those under water.