Bubbling under the surface: Californian sparklers 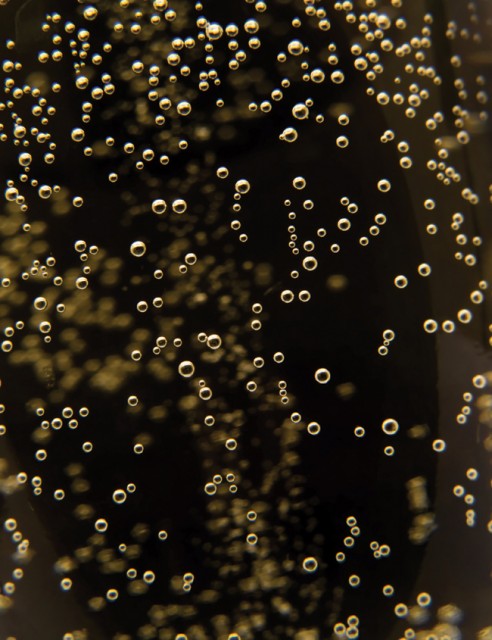 OF ALL Californian wines, none defy preconceived notions more than traditional method sparkling wines. Their acidic backbone embodies the brisk freshness of coastal morning fog while brilliant afternoon sunshine is expressed in their pristine fruit.

A small elite of traditional method sparkling wines enjoys big recognition at home – being served at the White House seems to be the badge of honour that all the producers mentioned here share – but whenever there is talk of Californian wine, fizz hardly gets a mention. Certainly, production is small and exports are (still) marginal, but the quality of the wines deserves a wider audience. While the focus is on the domestic market where cellar-door sales represent a sizeable chunk of turnover, the more generous 2012 vintage means producers have started looking beyond national borders. With both quality and price points similar to Champagne, how are they faring over here?

By common consensus, there are four outstanding producers operating today. The oldest of those is Schramsberg Vineyards in Calistoga, Napa Valley. At this historic property, with mountain cellars dug in the 19th century, the Davies family made their first traditional method sparkling wines in 1965. The vineyards surrounding the property no longer provide the grapes for sparkling wines; they are sourced in cooler areas: Carneros, Anderson Valley, the Sonoma Coast and Marin County. Of the 12-13 cuvées made each year, some small production lots are not commercialised: the immensely poised 2007 Brut Napa Valley, for instance, is only wheeled out for special occasions. It is prestige bottlings like these that make the name Schramsberg so memorable. Only 3% of the annual production of 65,000 nine-litre cases are exported, while a quarter is sold directly at cellar door, underlining Napa Valley’s popularity as a tourist destination. Schramsberg’s Blanc de Blancs 2007 (current release) or the prestige cuvée J. Schram 2005 are more widely distributed. Hugh Davies, CEO of Schramsberg Vineyards, says: “It has been exciting to see demand grow steadily over the years.” Since its big break in 1972 when Schramsberg was served to President Nixon, “distribution is now established in 50 states and 30 export markets”. While Davies is sanguine about the future and predicts that “global demand for fine sparkling wine will certainly continue to rise”, there are currently no expansion plans.

WELL CONNECTED
Domaine Carneros, just 30 miles south, was, unlike Schramsberg, purpose built by the Taittinger and Kopf families (of Kobrand fame), for sparkling wine in 1989. Eighty- nine hectares (53ha Pinot Noir, 36ha Chardonnay) are cultivated organically, certified since 2007, providing fruit for 97% of the estate’s production. The remaining 3%, explains Eileen Crane, CEO and founding winemaker, are necessary to stay on top of clonal and viticultural development All the wines, bar rosés, are vintage-dated and exclusively from the Carneros AVA, a fact of which Crane is proud. “Great wines are always wines from a place, never from all over,” she says. Crane compares the climate to warm vintage years in Champagne, without the annual variation: “We’ve been able to produce Le Rêve, which is our prestige cuvée, every year since 1992.” Le Rêve is just 2% of the annual production of 55,000 nine-litre cases and again, the export portion is tiny: just 2% of the total. But there is good reason: “We’ve had four very tiny crop years so we’ve been short on inventory and stock,” explains Crane, adding: “I’d like to see export being 5-7% over the next few years and I think that’s possible. It’s important to be seen in the international market.” In the marketing of Domaine Carneros, the association with Taittinger (which is stated on US labels) has clearly helped. “It gets us in the door, the taste sells the wine,” says Crane. Fiona Mottershaw, brand manager at UK distributor Hatch Mansfield confirms: “We emphasise the Taittinger link. The wines are very much hand-sell products, when you get the opportunity to present them directly, either to consumers or trade, reactions are unerringly enthusiastically positive.” A price-point similar to NV Champagne, however, remains a challenge. 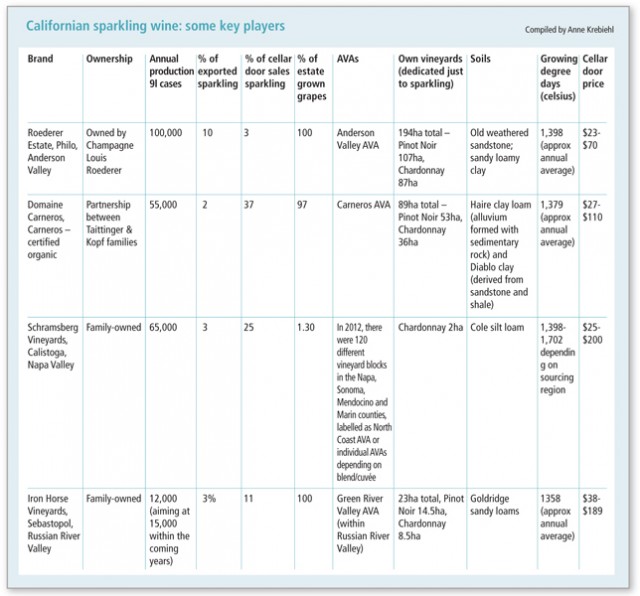 BIG HITTER
The largest quality producer and biggest exporter is Roederer Estate in Philo, 80 miles further north in Mendocino County. Its production of 100,000 nine-litre cases annually, of which 10% are exported, is dwarfed by Louis Roederer’s Champagne output, but the ethos is similar. Arnaud Weyrich, vice president and winemaker at Roederer Estate, explains: “As there are no regulations in California on how to make sparkling wine, we rely heavily on the French quality standards to craft traditional method sparkling wine.” His export strategy is simple: “Being present on the main export markets – Europe, Japan, Canada and China – and showcasing the best possible New World sparkling wine.” Unlike its peers, Roederer’s famous Quartet NV is not vintage-dated: the more northerly location necessitates more rounding from foudre-aged reserve wines. There is no hard and fast rule on malolactic fermentation, just that the dosage is slightly higher (12g per litre on average). Roederer Estate grows all of its own fruit on 194ha (107ha Pinot Noir, 87ha Chardonnay). Jackie Brown, senior brand manager in the UK of MMD Ltd, reports that despite its NV Champagne price point, “Quartet seems to have found its “own” category” where “national distribution is deliberately selective.” She has “definitely seen an increase” in both interest and sales, citing particularly the rise of American-styled restaurants. MMD is even considering bringing in magnums now. The link to Champagne still helps. “We make sure customers are aware of Quartet and its connection to Champagne Louis Roederer. It’s such a strong link and generates confidence,” she says. James Hocking, director of wine at The Vineyard Group, Schramsberg’s UK distributer, echoes this: “The trade, in particular independent retail, seems to be considering Californian sparkling wine for the first time now. London steak houses are moving good quantities, plus a recent listing at Hedonism Wines underpins the quality of the wine. Generally speaking, we are selling more this year than last.”

SIZE LIMITATIONS
The smallest producer with a mere 23ha (Pinot Noir 14.5ha, Chardonnay 8.5ha) and a production of just 12,000 nine-litre cases is boutique operation Iron Horse Vineyards in the Green Valley AVA of Russian River. Winemaker David Munksgard who has been there since 1996 recounts that after years of trying to “downplay this beautiful fruit” he learned to embrace it and started at Iron Horse with the aim of making “an entirely different style – a Californian sparkling wine – and do the best we possibly can with that”. He has foresworn malolactic fermentation and knows his small parcels intimately – his vins clairs are strikingly different and palatable in their still state. “We are limited by the size of our estate, we grow what we make,” he says but concedes that they are trying to get to 15,000 cases per year. Joy Sterling, CEO of Iron Horse Vineyards, agrees: “Iron Horse would like to grow in export to establish ourselves as a global brand, but as is so often the case, our greatest strength – being estate bottled – also limits us on an international scale.”

Stateside, the challenge is to get people drinking sparkling wines not just on special occasions, as both Munksgard and Crane point out. Over here, the challenge is to convince people of the superior quality and value. While a chilled flute of Iron Horse would quickly accomplish that, Eileen Crane has a splendid idea: “Do you remember the Judgement of Paris?” she asks. “They staged a re-do of that and nobody’s ever put a sparkling wine in that,” she exclaims, “now this would change things.”