Jackson Family Wines showed off the most recent addition to its Napa Valley portfolio, Mt Brave, whose 2009 vintage is due to arrive in the UK within the next few weeks. 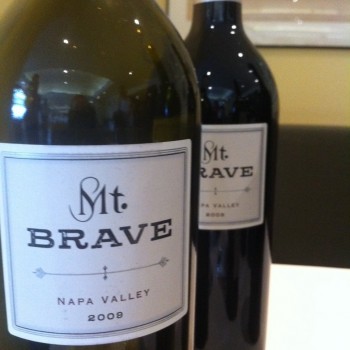 Having bought the property – then called Chateau Potelle – in 2007, the company renamed it after the nickname given to the Wappo, or “Guapo” tribe indigenous to the Napa Valley.

The Mt Brave property is located at the northern end of the Mt Veeder AVA, bordering the Jackson’s Lokoya vineyards, although winemaker Chris Carpenter nevertheless noted the difference between the two sites.

In particular he highlighted the bowl in which the Mt Brave vineyards are planted, compared to Lokoya’s flatter terrain. “We realised that we had the opportunity to create flavours from Mt Brave which we hadn’t experienced in the past,” he said, pointing to the wine’s “much softer tannins, more red fruit, more approachable” style.

As a result, Carpenter suggested that whereas the $350 Lokoya Mt Veeder “is probably a 20-year-plus wine”, the $75 Mt Brave “will maybe hit its stride in 15 years.” Thanks to this more precocious style, he remarked: “I like that the restaurateurs feel confident about opening this wine tableside, rather than needing to decant it three hours before.”

Despite the Mt Brave vineyards being “in decent order” when they were brought into the Jackson stable, Carpenter outlined a number of changes he has since implemented, including their irrigation regime and canopy management.

“I don’t like a lot of water on the fruit,” he remarked, adding that, particularly with the varying orientation of the vine, “the leafing needs to be a little more precise.”

In keeping with the rest of the Jackson Napa mountain collection, which includes Lokoya, La Jota and Cardinale, Mt Brave is matured for 22 months in predominantly new French oak. Alongside its flagship Cabernet Sauvignon-led wine, the 100-acre Mt Brave vineyards also produce a Merlot and a Malbec.

Although the first official release for Mt Brave was the 2008 vintage, 2009 will be the first vintage to appear in the UK. “Mt Brave was so successful in the US that they took all the allocation,” reported Dimitri Mesnard MS, international brand ambassador for Jackson Family Wines.

Despite the delay in sending this latest Napa portfolio addition to the UK, Mesnard confirmed “robust following for all these wines” in this market, revealing that it accounts for “about 15-20%” of sales; however, he noted that a proportion of this is re-exported to markets such as Hong Kong.

“The Bordeaux drinker is turning anywhere now,” Mesnard explained of this popularity. “Great wines are being made everywhere.”

Taking responsibility just for the estate’s 100% Cabernet Sauvignon expression and this component of its traditional Australian Cabernet/Shiraz blend, Carpenter remarked: “You’ve got to be cognisant of the terroir, it’s very different to Napa.

Nevertheless, he noted of Australia: “There’s a lot more they could explore Cab-wise. I want to see if the way I make wine can be accepted and find an audience. I’m heartened by the fact that my style is seen in Margaret River, even if not so much in McLaren Vale.”

With bottling of the Jacksons’ first Clarendon wines due to take place in December, Carpenter indicated that they could reach the market by “June or July 2014.”