Scotland is a passionate nation. 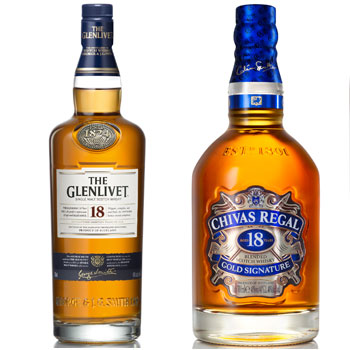 It’s no cliché, for example, to say Scotch whisky and football – not always necessarily of the Scottish variety – are at the core of our very being.

(And if the great, passionate Glaswegian comedian Billy Connolly is to be believed, a roll and square sausage washed down with a mug of tea is another Scottish experience everyone must try)

Scotch whisky is our most famous export, enjoying unprecedented demand, with more than one billion bottles sent overseas each year. Our football fame, meanwhile, has been waning since the World Cup in France 1998, though world domination is always just another game away.

My experiences as Chivas Brothers’ global ambassador show that passion undeniably travels to the scores of countries where Chivas Regal, for example, is sold.

Whisky, like football, engenders debate and further passionate comment. No single subject is raised more often than malts versus blends. And, ladies and gentlemen, I for one don’t buy it.

On a recent visit to West Africa, a guest uttered the familiar phrase I only drink malt whisky, as we shared a dram of The Glenlivet 15 French Oak Reserve in Luanda.

The sentiment is an honest one, evidenced from personal taste and experience. But sometimes the tone can be more dismissive.

In the Middle East, I was told Scots don’t mature grain whisky. In Scandinavia, I was informed grain is added for bulk.

I’ve heard malt enthusiasts proclaim, I can taste the grain, when trying beautifully crafted blended Scotch whisky when the light, sweet, vanilla note they identify can be found in many malts predominantly matured in an American barrel.

All of this is of course a matter of misinformation. I implore you to take part in a comparative grain whisky tasting – you’ll enjoy the flavour profile and range of aromas immensely.

However, to take the debate further, and go on to dismiss blended Scotch (and indeed grain whisky) as inferior is disingenuous and does a disservice to Scotch whisky as a whole.

In many emerging and traditional whisky countries from the USA to China blended Scotch whisky enjoys an incredibly luxurious profile before an audience with a real thirst for provenance and knowledge.

To my mind, couched on those terms then, the blended Scotch drinker is no different to the malt enthusiast in their appreciation of fine Scotch whisky.

Manchester United has a master craftsman at the helm in the great Scot Sir Alex Ferguson.

He brings decades of experience, an intimate knowledge of the beautiful game and those players who bring their unique character to one of the world’s greatest football clubs.

Single malts are unique and have depth of character that is the hallmark of their distillery like some of Fergusons’ stars, for example, the beautifully balanced and perfectly aged Ryan Giggs.

For Ferguson, however, no player is greater than the club and the team ethic, harmony of character like a great blended Scotch, and consistency is what matters.

Scotch whisky is about time and place, it’s about people. It is about new experiences and an open mind.

A favourite tool of mine is to taste malt and blended Scotch blind to dispel with prejudice.

The results, with Ballantine’s 17 Year Old for example, prove beyond reasonable doubt that malt whisky and blended Scotch coexist as equals and those who enjoy one or the other do so for exactly the same reasons.

The wonder lies in discovery.

I concede the beauty of Scotch is there are always at least two opinions and that is because it engenders passion.

As for Scottish football, that’s for another day.