LVMH’s alcoholic drinks division has reported a 7% organic revenue growth in the first quarter of this year, more than the group’s increases for fashion, cosmetics and watches over the same period.

The company’s wine and spirits sector, which includes the world’s largest international spirits brands as well as the biggest Champagne houses, enjoyed a revenue growth of €53m from €926 million in quarter 1 last year to almost €1 billion in first quarter of 2013 (see table below).

Moët Hennessy Louis Vuitton said the growth in Champagne was driven by increasing sales in Asia, which compensated for declining demand in the sparkling wine’s largest markets – France and the UK.

Asia, particularly China, along with the US, buoyed the sales of Hennessy Cognac, while the group said that smaller spirits brands in its portfolio, such as Glenmorangie and Belevedere, “experienced a good start to the year.”

Posting organic revenue growth of 17% to total €2.122bn, this aspect of LVMH’s business is fast approaching the revenue generated by the group’s biggest division, fashion and leather, which totalled €2.383bn in the first quarter of this year.

Fuelling such growth is Asian tourism according to LVMH. In particular, the group noted that Sephora has expanded its store network and opened its largest store in China in Shanghai earlier this year.

“In an economic environment which remains uncertain in Europe, LVMH will continue to focus its efforts on developing its brands, will maintain a strict control over costs and will target its investments on the quality, the excellence and the innovation of its products and their distribution,” said the group in a statement released with the results. 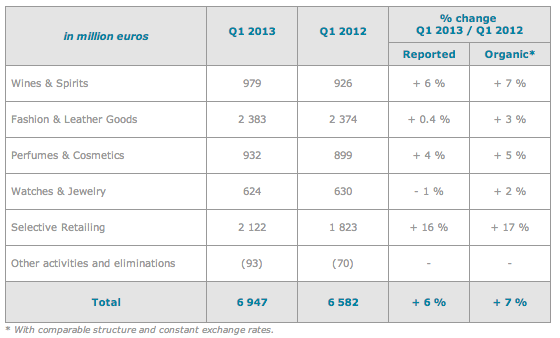