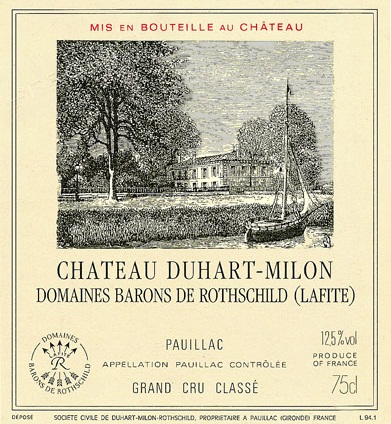 Pauillac property Duhart Milon was released late yesterday afternoon with a 7% drop from 2011’s €57 p/b to €53 p/b (all prices ex-négociant).

Headlines were dominated by the release of Lafite yesterday but also pushed through with little fanfare was the second wine, Carruades de Lafite with a 12% drop on its €108 p/b 2011 release.

Bidding on Liv-ex currently stands at £850. With the exception of the 1998, that makes it the cheapest on the market – most Carruades costing in excess of £1,000.

Having risen extremely far very fast, Carruades, perhaps more than the first wine, is in need of serious price correction.

On the other hand its quality is meant to have risen as high as its former price. Lay & Wheeler described it as a, “truly remarkable wine”.

The rise of Bordeaux prices in recent years has meant that Alter Ego and Duhart Milon did not need to drop prices too much to make the 2012 the cheapest (though not in the case of Alter Ego where the 2008 and 2001 are both quite competitively priced under £400 a case).

With the second wine out, all eyes will now be on Palmer itself. It released last year at €162 p/b.