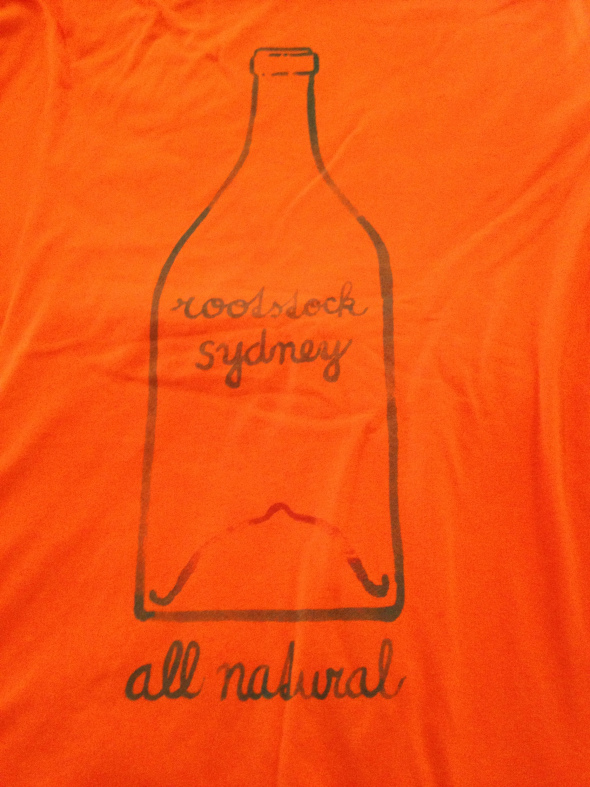 Called Rootstock, the Sustainable and Artisan Wine Festival, the event was organised by wine journalist Mike Bennie, Giorgio De Maria of Sydney wine bar 121 B.C., James Hird of The Wine Library, and Matt Young and Linda Wiss of Black Market Sake. The ticketed event was bursting to capacity with over 500 people queuing to get in.

Although the term “natural” was purposefully omitted from the festival’s title, the tasting consisted of 46 winemakers working in this philosophy, mostly from Australia and New Zealand, including Tom Shobbrook, Anton von Klopper (Lucy Margaux) and Mike Weersing (Pyramid Valley), with a handful from Italy and Slovenia including Dario Princic and Fulvio Bressan.

Throughout the day a rotating set of orange-clad sommeliers hosted at the orange wine bar pouring a variety of the skin-macerated white wines while ensconced in the orange glow of the bar itself.

A variety of masterclasses on subjects like seafood and wine, biodynamics, and soil, were led by journalists and sommeliers from around Australia including Max Allen, Richard Hargreave, and Richard Cornish.

The festival concluded with a sold out dinner consisting of courses made by some of Australia’s top chefs, including Ben Greeno of Momofuku and Luke Burgess of Garagistes in Tasmania.

“The reach has been much larger than we expected. The extraordinary show of support from people far and wide for Rootstock has been heart-warming and reaffirming,” Bennie told the drinks business.

“We received between 600-700 tweets on Sunday alone mentioning us and the feedback has been extremely positive and enthusiastic, and even dramatic. We had high profile people in the wine industry who were previously very public naysayers change their views totally about natural wines after visiting the fair.”

And while many members of the Australian wine trade travelled from the far reaches of the country to attend the festival, the majority of tasters were consumers.

“There were a lot of people there who were new to these wines,” says Bennie.

“And they went away with an initial impression of what we originally set out to achieve, which was a global conversation about wine and produce. A lot of people there came with an interest in food provenance but not wine. Not a lot of people get the opportunity to taste wines like this, which are so reflective of the winemaker and site. So there was a lot of exploration which is exactly what we were hoping for.”