What is Chartreuse? A potent elixir made for centuries in an ancient monastery deep in a valley of the Chartreuse Mountains, but what mysterious aura surrounds this fragrant concoction? 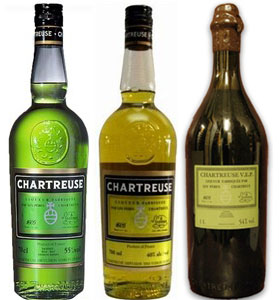 Deep in a monastery shrouded by the cover of the Chartreuse Mountains in France, two monks concoct an intoxicating elixir whose recipe is known only to them. The history of this elixir stretches back over hundreds of years through turbulent history and troubled times, yet the beverage has persevered and is still available today for public consumption. Few may think to order it or seek it out for its exquisite and pungent taste, but it still maintains a cult following and is starting to gain some popularity as a welcome ingredient to certain cocktails or just to be served straight and sipped.

Actually produced in a factory that lies nearby to the monastery in a town called Voiron, Chartreuse has a colourful history and exotic taste that make for a very interesting liqueur. The monks create two types of Chartreuse at present day: a Green variety and a Yellow variety. The Green is not only more popular but also a tad more potent, with an abv that comes in around 55% (the yellow comes in at 40% with much softer and gentler flavours and aromas). The green libation proudly gives its name to the colour that we all know, and is a liqueur that will continue to evolve and age in its bottle, much like a fine wine. Generally preferred neat, Chartreuse has a distinctly sweet taste that then morphs into a spicy and pungent body, leaving many flavours to coax the palate. It also finds a home high up in the majestic regions of the snow-peaked Alps at popular ski resorts, where it is served with hot chocolate to create a warming pick-me-up known as “Green Chaud”. This spirit calls for a recipe of 132 plants and is distilled from this specific number of herbal extracts, gaining its expressive green colour from chlorophyll.

What is Chartreuse?
Seasonality: Year-Round
Producer: Chartreuse
Classification: Liqueur
ABV: Green: 55%, Yellow: 40%
Country of Origin: France
Trivia: Two characters in Evelyn Waugh’s novel Brideshead Revisited enjoy a glass after dinner: “Real G-g-green Chartreuse, made before the expulsion of the monks. There are five distinct tastes as it trickles over the tongue. It is like swallowing a sp-spectrum.”
Availability Info/Look for This: You may be able to find it on the shelves of certain liquor stores in your area, but if not, here is a site where you can purchase it online: www.drinkupny.com

In 1605, a medieval figure, whose name was supposedly Francois Hannibal d’Estrees, came to the lonely monastery at La Grande Chartreuse (a name that comes from the mountains that surround the monastery), and presented the monks with a scrawled alchemy formula that was touted as being an elixir for long life. The monks then took in this precious recipe and tinkered, tweaked, and improved upon it for many years, first creating a substance know as Elixir Vegetal de la Grande Chartreuse. This original brew, which was composed of 130 different herbs, flowers, and closely-guarded secret ingredients added to a wine alcohol base, was continuously mastered and experimented with over the ensuing years until it officially became Green Chartreuse in the year 1764.

A series of events that followed found the monks being forcefully expelled from their cozy monastery in 1793, only to return to their abode in 1838 to develop Green Chartreuse’s milder, younger cousin: Yellow Chartreuse, which is coloured with saffron. The poor hooded Brothers, clothed in their long, draping habits, were once again expelled from their precious monastery and France altogether in 1903, where they were forced to take their coveted secret recipe for Chartreuse all the way to Tarragona, Spain. To make matters worse, the distillery was carried away by a mudslide and completely destroyed in 1935, when it was then rebuilt by French Army engineers at a different location. The monks were soon considered legal French residents once again after the Second World War and were allowed to continue operations near the town of Voiron, returning the original sacred recipe for the elixir of life to its true home.

This unique distillate still manages to uphold its shroud of mystery, where even to this day, only two monks know the actual recipe that goes into Chartreuse and only they themselves prepare it. Despite its secrecy, it has been highly praised with silver and double gold medals at the San Francisco World Spirits Competition and scores ranging from 96-100 by Wine Enthusiast. Is this elixir worth trying straight up or as a welcome splash to one of your cocktails? Give it a try, and who knows, you may find yourself living long enough to discover the true recipe as a result.

Written by Max Stein with RhoMania, “Helping people enjoy life more, one beverage at a time.”