Carling to unveil its first cider in the UK 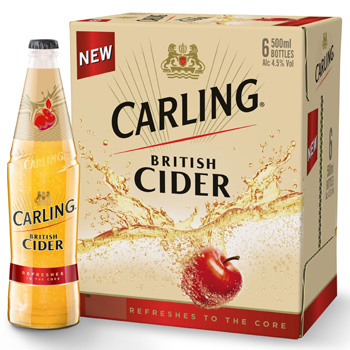 The new 4.5% abv “modern premium cider” comes from Herefordshire and is the latest addition to Carling’s stable of products.

Carling British Cider will launch exclusively in the off-trade in March 2013 and will be available in 500ml and 275ml bottles.

In a statement the company said that after a year of “refining and perfecting the cider”, consumer tests carried out by MCBC Consumer Research put the new cider ahead of the current market-leading brands on “taste, refreshment and likelihood to buy”.

Jeremy Gibson – brand director for Carling at Molson Coors UK said: “Our aim was to make a product that beats the competition on taste and refreshment and Carling British Cider has done just that. The consumer response has been overwhelmingly positive, proof that the time and investment we’ve made to ensure it is a fantastic product has paid off.

“Carling British Cider adds to the diverse portfolio of drinks we already offer to our off-trade customers and their shoppers. Following 30 years of success for Carling, we are entering a growing cider market using the strongest brand name in the industry.”

Molson Coors has said it will be investing around £4.5 million in a marketing campaign for the launch of Carling British Cider, which will be taking aim at an off-trade market that was worth £869m last year.