Dexter Koh enjoyed a big casino win and celebrated by spending £120,000 in a London nightclub. 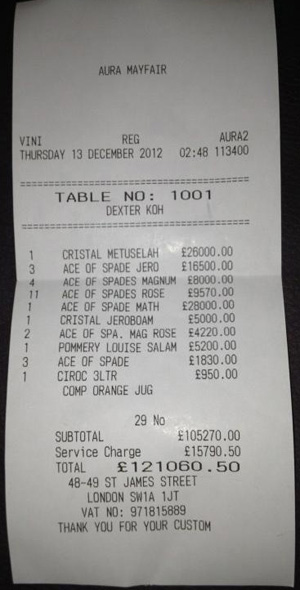 Koh, who describes himself as a talent agent, celebrity photographer, PR and media personality, had a “six-figure win on the tables” and decided to head to Aura nightclub to celebrate.

Koh, from Shoreditch in east London celebrated the win with model Danielle McMahon and friends and tweeted several pictures of their Aura party through the night.

Koh’s mammouth bill was a Champagne bonanza, as the bill that he tweeted showed.

The big hitters were two methuselahs, one of Cristal and one of Armand de Brignac Champagne, known as the Ace of Spades. The Cristal cost £25,000 and the Armand was £28,000; a methuselah is a six-litre bottle, but that was not enough for the party as there was much more Champagne to come.

Koh clearly had a taste for the Ace of Spades ordering a further three bottles, four magnums and three jeroboams, he also ordered a jeroboam of Cristal, which is a three litre bottle.

It was certainly a case of big bottles ruling for Koh with the ordering of a salmanazar of Pommery Cuvée Louise, the nine litre bottle is the equivalent of one case in a bottle and cost Koh over £5,000.

The big spender mixed things up a bit with 11 bottles and two magnums of Ace of Spades rosé. The epic night out was rounded off with a bottle of Cîroc Ultra premium vodka, which is thought to be Prince Harry’s favourite tipple.