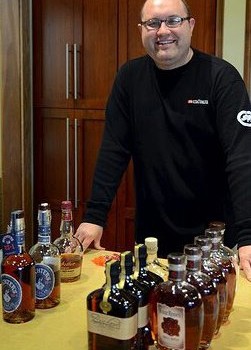 Hello drinks business community. It’s wonderful to be writing for you. I have been working on the theme for my series for the last few days and it occurred to me that I had the the rare opportunity to talk about American whiskey to all my European readers.

This category of whiskey probably has as much romantic appeal to you as Scotch does to me.  So I won’t try to burst any bubbles and tarnish your image of us Yanks. So as you swing each dram and drift into a daydream of late 70’s muscle cars, or the sounds of classic country music.  I hope to keep your  expectations in tack. I hope that you will read my column and find it as a useful tool in understanding bourbon and rye not from a marketing viewpoint but a redneck distiller.

I am not very traditional when it comes to reviewing spirits. I feel its counterproductive to describe what you will taste or smell. I find each of us taste and smell based on sense memory that’s as unique as a finger print. I always get a ton of shit for tossing out the rules, but it’s almost un-American not breaking the rules from time to time.

If you’re new to Rye, think of it as the background note in Bourbon that gives it a spicy taste to accent the corn sweetness. When on its own you get a big spicy note with a little dryness depending on the grains used in the product. American law only mandates that to be called a  Rye whiskey their only needs to be 51% Rye in the batch.

This gives distillers a chance to change the flavor with other grains.  Jeffersons on the other hand is a 100% rye with that big spicy taste.  Its often the base in many classic cocktails such as the Manhattan or Sazerac. This spirit was one of Americans first long before bourbon. Rye was not always the highest quality spirit we can buy today. Cocktails were not just a tool to mask the taste but a tool to cover up poor distillation back in the early 1900’s.

Today as bartenders build cocktail time machines in fancy bars all around Europe the use of this American beverage is becoming more common. You may find that you have already tried it and don’t know it.

My guess if your reading this, you may already have some small connection with rye. Jeffersons rye is a strong showcase in this small group of ryes.

To give you a little background on Jefferson it’s an independent bottler very similar to Gordon and Macphail in Scotland. They just buy bourbon and rye from larger manufacturers and bottle the plunder.

The head dog Trey Zoeller is a younger chap that has the quintessential look of a Southerner.  His picking skills are impeccable and his small batch bourbon showcases the depth of the bourbon industry we even in the united states very rarely get to see.

Jeffersons is a great little rye, and straight or in classic cocktails it works fine.  I built myself a ward 8 last night and enjoyed the Jeffersons flavor it in.  I’m not sure how well distribution is for it. I did not find it on Master of Malt’s website but they did have the Bourbon. My guess is if you ask the staff at Master of Malt nicely they can get you a bottle from Trey.