Brewer wants to “kill beer stereotypes” by bringing in a 6cl bottle for the world’s strongest fermented beer. 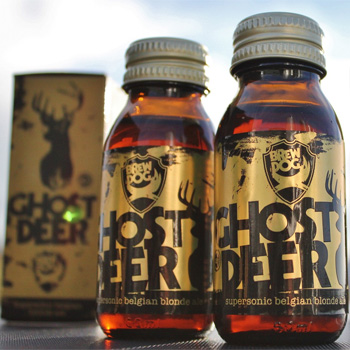 BrewDog, which is Scotland’s largest independent brewery, has turned its back on the pint glass and bringing in a new 6cl bottle for its 28% ABV “Ghost Deer” beer.

Other, stronger ales have been created but they have used a freeze distillation process, but Ghost Deer is created using fermentation alone.

The brewery said that selling the strong beer is 6cl bottles is, “ a physical demonstration that beer can be more than a pint of fizzy, apathetic, yellow lager”.

James Watt, BrewDog’s cofounder said: This is a landmark for creative brewing and with the new 6cl bottles we’re bringing it to everyone, thumbing its nose at the establishment with every lingering sip.

“Global, monolithic breweries have spent millions on marketing to tell British beer drinkers that beer is about necking seven pints of gaseous, liquid-cardboard lager and having a kebab on the way home.

“Ghost Deer is the nail in the coffin of that perception – its very existence kills the stereotypes. Ghost Deer is a statement against the system, against the status quo: this is a turning point for beer in the UK.”

Watt added: “We have been criticised before fore being reckless in brewing high ABV beers, but the opposite is closer to the truth. Britain’s binge drink culture is fuelled by stack-them-high, sell-them-cheap beers peddled by giant mass production breweries, not artisanal, craft beers like this one that teach drinkers that beer could be so much more.”

BrewDog has also announced the appointment of a new operations director, in charge of its bar division.

Caroline Morris has joined the brewery from Mitchells and Butlers and joins as the brewery is expanding its network of bars. Two new bars opened recently in Bristol and London, with further openings coming soon in Birmingham and Leeds.

Morris said: “I’m really thrilled about my new role. BrewDog have always been at the forefront of engaging customers and making them passionate about great beer. In my new role I hope to be able to tap into this ethos and get more and more people to enjoy and love awesome craft beer.”

Watt added: “Caroline comes with a wealth of experience and she’s exactly the kind of person we need at this moment in time. We’ve got a lot of new bars opening and we need someone like her to ensure we are not just tags on a map, but awesome, interesting spaces where people come to learn and love great beer.”