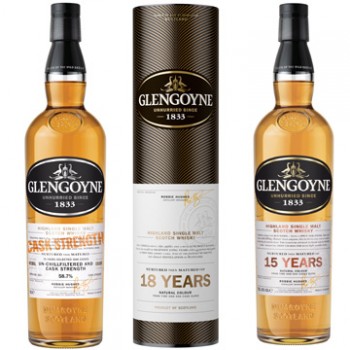 Ten years ago Ian Macleod distillers acquired the Glengoyne brand and since then global sales volumes in the whisky have increased  by 250%.

In a bid to make the most of the increased popularity of Glengoyne the distillers have repackaged and added to the whiskies on offer.

In addition to the 10yo, 12yo and 21yo, Glengoyne has introduced three new malts to complete the  line-up – a new premium Glengoyne 15 year old malt, a new formidable cask strength expression to replace the current 12 year old cask-strength and a stunning new world-class 18 year old replacing the 17yo.

Neil Boyd, UK Commercial Director for Ian Macleod Distillers said:  “We’ve been working on the enhancement of the Glengoyne range over a long period of time. At a time when the industry is squeezing every last litre out of their distilleries, we hold true to our craft. By distilling slower than anyone else in Scotland, we can genuinely claim that Glengoyne is ‘Worth the Wait’.”

The whisky is finished in Oloroso sherry casks and also dries the malted barley using only warm air.

The new Glengoyne range, which launches in early November 2012, will be supported by a new advertising campaign and will be available from selected supermarkets including Waitrose, Sainsbury’s and in Selfridges and leading specialists and independents.