Time could be called on spraying bubbly to celebrate at US Major League Baseball (MLB) games. 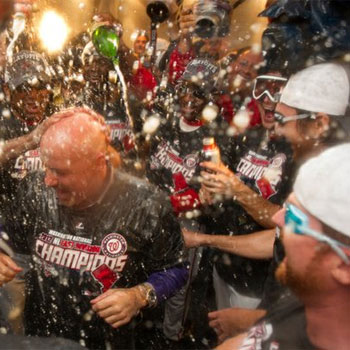 Bud Selig, the commissioner of MLB in the US, has voiced his displeasure with the time-honoured tradition of spraying Champagne to celebrate victory.

As the MLB moves into the post-season matches, teams start to celebrate closing in on the World Series final by soaking each other in Champagne; a similar tradition to the one seen at the end of Formula One races around the world.

But Selig does not like it and he said: “This is something I am not happy about: spraying Champagne all over. I’m not a fan of that.”

Selig added that he has discussed the issue with Major League teams but no action is imminent.

“I’m not saying we will do anything. But it is something we have talked about.”

Baseball celebrations have become increasingly outlandish, which could be a reason for a future crack down. Recently the Washington Nationals went through 60 bottles of Korbel and Dom Pérignon 2002 and 20 cases of Miller Lite to celebrate their playoff berth.

The first three Formula One drivers to finish each race usually spray one magnum of Mumm Champagne each to celebrate; in Bahrain the winners spray non-alcoholic rosewater.