The Campaign for Real Ale has revealed the details for the 2013 Great British Beer Festival. 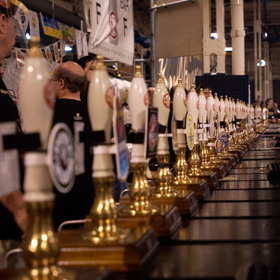 The Publican Morning Advertiser reports that the festival will once again take place in the London Olympia and will run from Tuesday, 13 August through to Saturday, 17 August.

Tony Jerome, Camra’s head of marketing, told the Advertiser: “After hugely positive feedback from festival goers we are delighted to announce we’ll be returning to Olympia again next year.

“Back in August, during a difficult year, we were really pleased to break our attendance record at the venue, and the planning is already underway as to how to make the 2013 festival an even bigger success.

Camra referred to the 2012 Great British Beer Festival as “Britain’s biggest pub” with more than 800 different real ales, ciders and foreign beers to the 50,000 visitors over five days.