Christie’s Autumn sales opened strongly at the beginning of September with back-to-back sales achieving 97% sold by lot and 98% sold by value. 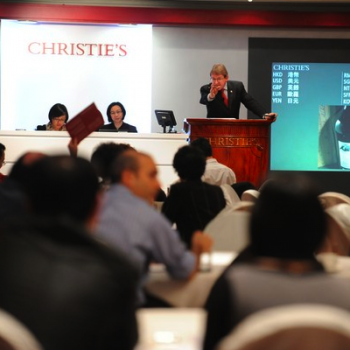 The Fine and Rare Wines: Pristine Rarities from the Cellar, and Vintage European Treasures sales, held on 8 September, heralded the start of the season’s sales and proved that the city remains a key location for some of the world’s top wine auctioneers.

“Results across the board exceeded our expectations. Incredible energy and excitement filled the saleroom as buyers vied for top lots of supreme quality and provenance,” said Charles Curtis MW, head of wine for Christie’s Asia. “There were active bidders participating not only onsite in the salesroom, but also over the telephone and through Christie’s LIVETM.”

The Fine and Rare Wines: Pristine Rarities from the Cellar sale started proceedings and achieved a 100% sold rate. Three exceptional collections of Bordeaux wine led the sale, with Château Mouton-Rothschild, Lafite-Rothschild and Latour each represented. The Mouton sold for HK$1,080,000, the Lafite at HK$960,000, and the Latour for HK$864,000.

The following Vintage European Treasures sale also performed well, with 98% sold by value. A diverse and sizable sale, the bidding was led by a 1990 case of Pétrus, which reached HK$420,000, and was followed by an assortment of 1985 DRC that achieved HK$288,000.

“The results of the September 8 sales in Hong Kong confirm several industry observations,” said Simon Tam, head of wine for Christie’s China. “Wine lovers are seeking quality wines for short to mid-tem cellaring, and to serve as perfect gifts in time for festive occasions surrounding the Mid-Autumn Festival.

“The market in Greater China is becoming increasingly sophisticated every sale as buyers grow progressively knowledgeable about grape variety and provenance, and develop a keen interest in the culture surrounding wine. This widened appreciation has lead buyers to refine their palates and selectively bid for classic Bordeaux vintages, rare wines from Burgundy, and bottles from revered regions such as Condrieu, Hermitage, Rioja, to name a few. We anticipate that this heightened sophistication, the underlying trend characterising this market, will only continue to prosper.”