South African winemaker Bruce Jack of Flagstone in Somerset West has launched a £65 single vineyard Pinotage onto the market. 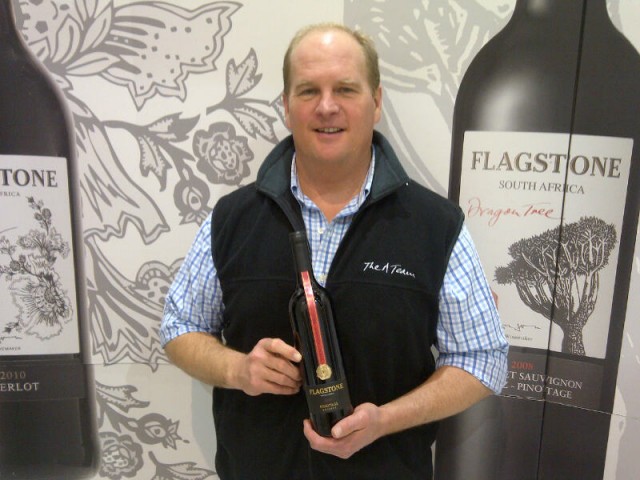 “My aim is to make the best wine in the world from Pinotage” Jack told the drinks business at Cape Wine 2012 in Cape Town this week.

“This won’t be a wine we produce every year, only in years we deem good enough,” Jack added.

The Pinotage grapes that go into the wine are grown in a south east facing, high altitude single vineyard in the little-known Breedekloof region in Worcester, north of Paarl.

“I looked at a load of maps and drove around the best looking slopes in the region. Striking upon one I particularly liked, I drove up to the farmer’s gate and knocked on his door. Luckily, he let me in,” Jack recalled to db.

“The grape grower, Anton Roos, is six foot tall and six foot wide and hunts buffalo with a bow and arrow,” Jack added.

He describes the smell of the wine as “ethereal”, and the palate as being intense, concentrated and black fruited with notes of mulberry and a wild strawberry twist in the finish.

Jack is adamant to stress that he’s not making the wine in order to convince sceptics about the merits of the much-maligned Pinotage, but rather because of his pride for and belief in the grape.

“Lots of people blame bad Pinotage wines on the grape, which is ridiculous,” he argued. “You could quite easily taste 10 Burgundies and only one would be decent but no one ever blames Pinot Noir.

“I’ve made a great Pinotage because I’ve chosen a good site and worked hard on it, giving it the care and attention it demands, just like its mother grape, Pinot Noir, which is equally demanding,” he said.

Jack works with low yields, discarding up to 50% of the crop if needed.

“I’m not trying to change consumer perceptions about Pinotage, neither am I trying to make a point. I simply believe that we can make the best wine in the world out of Pinotage,” he added.

Flagstone Time Manner Place Pinotage Reserve 2010 will go on sale in the UK next month through Direct Wines.