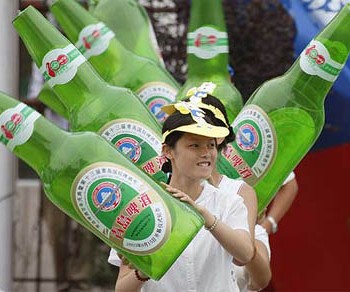 The 16-day event has opened its doors every second weekend of August since 1991, writes George Zhao.

“Last year, it gathered 3.8 million beer lovers, and I’m sure this year the figure will be more than 4 million,” predicted Mr Xia Zhenqi, the managing director of QBF.

Occupying 200,000 square metres, divided in 12 major themed areas, QBF is thought to be the earliest and biggest such beer event to emerge in China since the country opened to the world in the early ‘80’s.

Since Qingdao is not big city in China, why does the event occur here rather than somewhere else, Shanghai or Beijing?

The reason is quite simple: more than one century ago, in the 1880s, German navy vessels arrived, turning two or three small fishing villages into a pretty German coastal town.

In trying to provide everything for the daily life of both troops and community, one of a number of projects saw the establishment of a brewery, helped by the pure mineral water which was abundantly available. This brewery is thought to be the first in China or even the Far East.

Although its ownership has changed a number of times, the brewery itself has been operating without stop, increasing output from a few tones in the very beginning to 713m hectolitres in 2011.

One consequence of this has been the cultivation of millions and millions of local beer lovers.

The beer produced here, Tsingtao, is not only one of the top three beer brands in China, but is also now widely available in Europe and the US.

This year’s QBF sees more than 300 different products from from 16 countries, including big brands such as Budweiser, Carlsberg, Miller, Heineken, Beck’s, Becker, and many with a strong German background, such as Bitburger, Krombacher, Wolters, Löwenbräu, Mönchshof and Wernesgrüner.

Asian beers will also be represented in the form of Kirin and Asahi, along with other international names such as San Miguel.

With China one of the few remaining beer markets to see strong growth, it is no surprise to see so many big brewers come here in the hope of increasing market share.