A potential debate in Parliament on beer tax is a step closer with 80,000 signatures registered for the CAMRA e-petition. 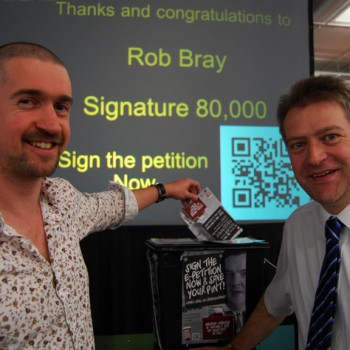 At the Great British Beer Festival, organised by CAMRA, it was announced that after a response from attendees during its opening sessions, the beer tax e-petition has now broken the 80,000 signature barrier.

The petition requires 100,000 signatures to secure a debate in Parliament on an issue which has been a major talking point all year.

The movement against beer tax is gaining momentum with 8,000 signatures secured in just three days since the festival first opened its doors.

Emily Ryans, CAMRA Campaigns Manager, said: “We at the Great British Beer Festival would like to say a big thank you to Festival-goers so far for getting behind the petition. In the final leg of the campaign every signature really does count so if you haven’t signed up yet please visit www.saveyourpint.co.uk and add your signature.”