Inspired by the six foot, half ton robot wine rack, we round up the top 10 weird and wacky drinks gadgets. 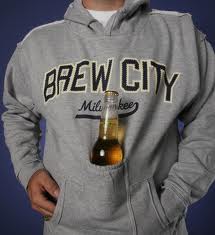 There are lots of wine, beer and spirits accessories and gadgets on the market and some are more wacky than others.

Some are practical and fill a need in the market, and others are just a little on the bizarre side.

On the following pages we rank and rate the 10 top gadgets that have caught our eye.

If you have seen any weird drinks gadgets, send us a picture or link to: info@thedrinksbusiness.com 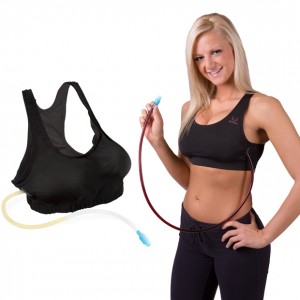 The Wine Rack Bra will hold a full 750ml bottle of wine and comes with a straw for sipping, thanks to the watertight tubing.

“It’s an idea whose time had come,” says Paul Krasulja, general manager of US based online site BaronBob.com, which specialises in selling off-beat gifts.

“It had been coming for a long time.”

The Wine Rack Bra has been on the market for at least three years and business remains brisk.

But men are not left out with The Beer Belly also available. 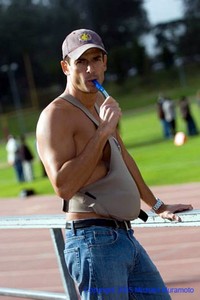 The Beer belly and Wine Rack Bra were both created by serial entrepreneur Brooks Lambert, a 50-year-old Californian who came up with the idea when he and a friend were hanging out in his backyard, remembering how they used to sneak beer into ball games and movies. 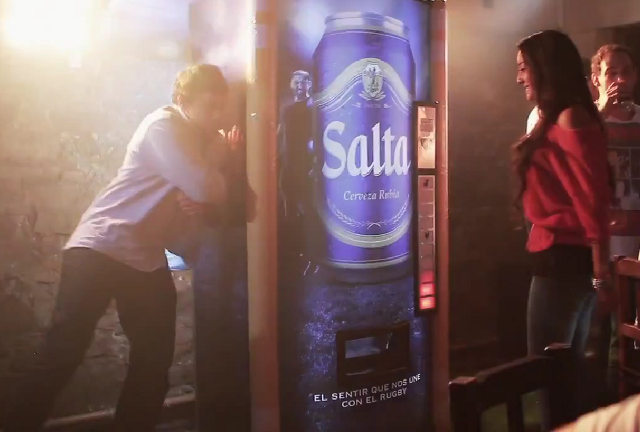 A beer company in Argentina has produced a vending machine for drinkers that needs to be “tackled” before it’ll dispense a drink.

The machine, called Rugbeer, is designed so that you have to tackle it to get your beer.

After inserting the necessary coins, the drinker is required to ram the vending machine at speed. A so-called “pussy meter” on the front of the machine indicates the strength of your hit – a woeful whack won’t deliver a beer, while a solid smash will.

The Rugbeer machines, designed by creative agency Ogilvy for beer brand Cerveza Salta, have reportedly proved popular with drinkers in the rugby-loving Salta Province located in the north of the country.

According to the beer company, the unique machine has helped boost sales of Cerveza Salta by 25% in bars where it was installed. 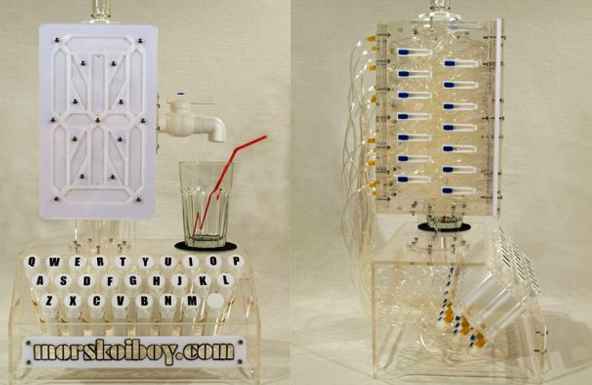 Using an impressive array of syringes and clear plastic tubing, the machine turns each keystroke into a small amount of liquid that is then dispensed into your drink.

As the user strikes different keys, the drink is mixed in equal proportions. While pumping the various concoctions, each letter that is chosen appears on a digital readout that is rendered using the liquid you’re pumping. This was invented by an inventor at Morskoiboy.

The future of cocktail making perhaps? 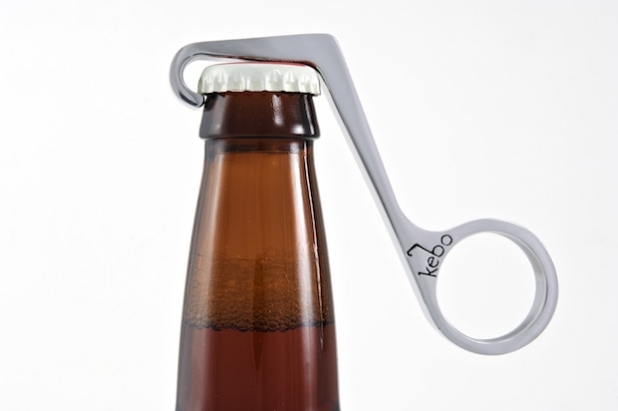 The one-handed bottle opener was created by Rush Dixon who said, “the idea was prompted by downtime as an architect in the summer of 2010 and a ‘chance encounter’ with an antique bottle opener.”

Maybe not the most outrageous gadget on the list, but definitely still cool. 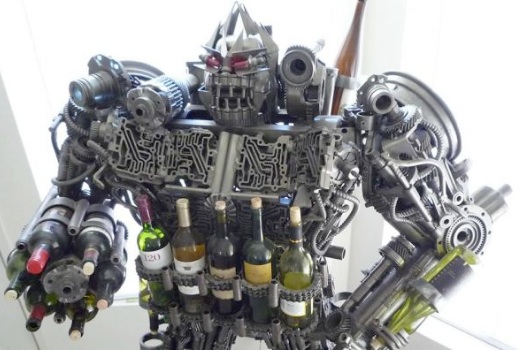 As reported previously on the drinks business a lighting salesman in North Phoenix has created a massive robot wine rack and put it up for sale on Craigslist.

The device securely holds 32 bottles of wine, weighs 1,000 pounds, and features an array of mock armaments. 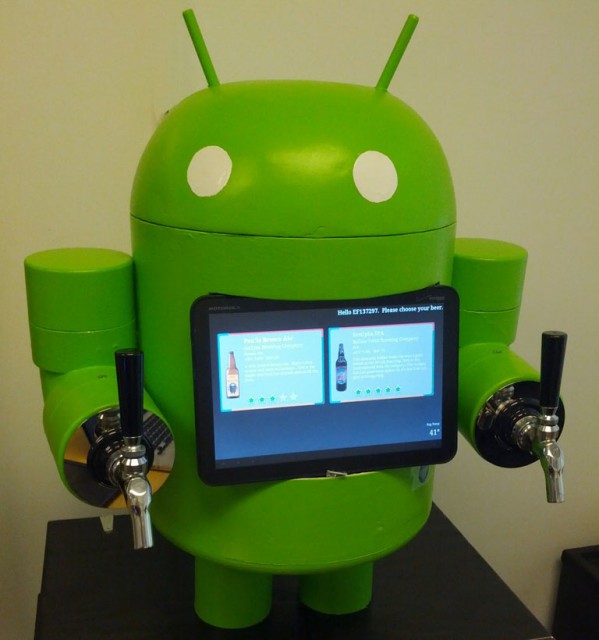 Google employee Paul Cariff has built KegDroid, a green robot that uses Google technologies to pour a glass of beer.

KegDroid’s design lets you select and order your beer at the click of a button. The KegDroid, also known as “Betsy” will then dispense your favourite brew.

The tablet that runs KegDroid is running the latest version of Android, Ice Cream Sandwich. This allows it to protect its assets and authenticate a person by grabbing your name and photo off a badge to verify it with your Google+ page.

Unfortunately its not on general sale yet. 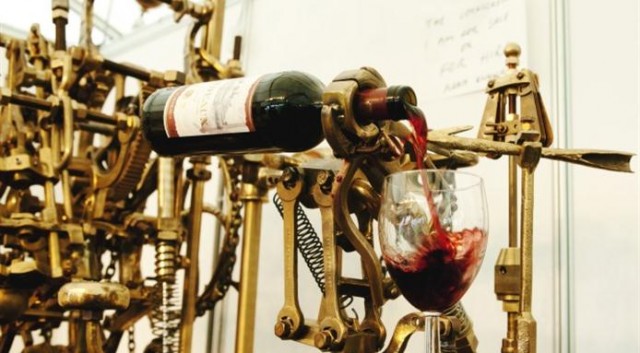 Created by UK designer Robb Higgs, this huge corkscrew stands at an impressive 5.5 feet tall and weighs half a ton.

This machine can open a bottle of wine and pour you a glass and is seriously cool. 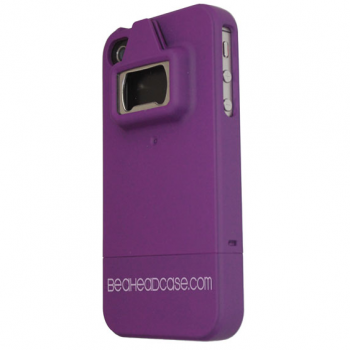 An iPhone case with a bottle opener and accompanying app is aiming to add fun and functionality to this summer’s parties.

Available in a range of colours and designs, the case is available from Avanquest’s website, with prices ranging from £19.99 to £24.99. 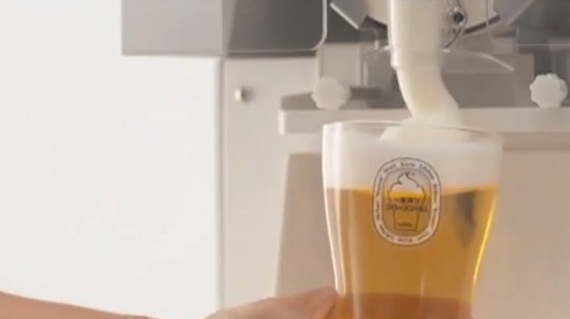 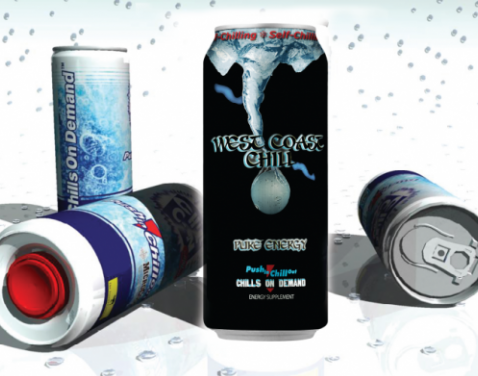 Claiming to be the world’s first self-chilling energy drink, this device apparently drops 30 degrees Farenheit in three minutes when you turn it upside down and push a button.

“We take reclaimed CO2 that’s out there in the atmosphere and we inject the gaseous CO2 into the activated carbon,” CEO Mitchell Joseph said.

“Once you push the button down, it starts pulling heat from the beverage and dissipating it out through the bottom of the can.”