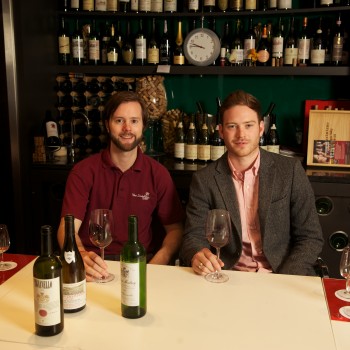 As millions watched on BBC television as Lord Sugar narrowed his choice of winning candidate down to two, 24-year-old wine investment advisor Gearing came under fire for lacking a professional wine qualification.

In the end, though, the peer decided wine investment was too risky and opted instead for winner Ricky Martin with his plan to start a new recruitment company.

But as soon as the cameras stopped turning Tom Gearing decided to study for a WSET qualification at the West London branch of localwineschool.com.

“My CV had come under fire during the interview process,” said Tom, whose business Cult Wines invests in Fine Wine on behalf of private clients.

“My father had worked in the wine industry and I grew up with lots of knowledge about France, but being on The Apprentice made me realise people are reassured by the professional qualifications.”

Tom chose the West London branch of localwineschool.com, run by Jimmy Smith, because of its reputation for no-nonsense, fun wine education, and its record of success in steering students through the WSET courses.

“The tutor was hugely entertaining and very professional,” says Tom. “My expertise is in French wines, but I learned a lot about wines from New World countries like California, Chile and Argentina, which I had never really focused on before.”

Tom passed his Level 2 WSET Award with distinction and now wants to continue to the Level 3 with West London Wine School before progressing to the Diploma, the penultimate qualification in the wine trade that takes around two years to complete.

Meanwhile his business Cult Wines has grown to an annual turnover of £3.5m, more than doubling the £1.25m turnover Tom quoted before filming for The Apprentice began.

“Fine Wine will always be an appreciating asset because it is a consumable product produced in limited quantities and becomes increasingly rare with time. If investors are willing to hold onto their portfolios for 5-10 years, I find they typically see returns in excess of 15% per annum.”