The acceptability of cans for premium quality drinks is on the rise, according to John Revess, sustainability director for Rexam, as he unveiled the results of the can manufacturer’s first Sustainability Report. 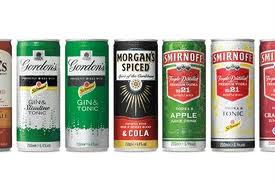 Although beer dominates the 45% of Rexam’s Business Can Europe business represented by alcoholic drinks, Revess pointed to threefold growth in the number of pre-mix products being packaged in cans since 2007.

As the pre-mix category itself enjoys a revival, Revess confirmed “a big increase in pre-mixed drinks in the UK over the last 12 months,” noting: “in the last five years the pack mix for pre-mix drinks in cans has grown from 2% to about 6%.

Marking a shift in the type of products being packaged in this format, Revess continued: “I think there is an opening for consumers to have a high quality branded product that is ready to drink: something convenient and priced at a premium.

“Five years ago you would not have seen major brands putting their products in cans, it was mainly own-label, but now it’s difficult to think of a pre-mix brand which doesn’t use cans.”

Revess also pointed to an increase in the amount of beer being packaged in cans, observing: “It’s been growing steadily – the pack mix has been moving out of refillable glass across Europe. There’s an ongoing shift due to the inconvenience of carrying glass home and the availability of multi-pack deals in cans.”

As Rexam’s report showed around 70% of the company’s 60 billion annual can production will be recycled in 2012, Revess insisted recycling is “absolutely the most critical” step a can manufacturer can take to improve its sustainability profile.

Although the firm’s light-weighting programmes has also proved effective, generating a 21% reduction in can weight since 1992, Revess explained: “It takes a lot of energy to make metal so there’s all that carbon produced.”

Pointing to the recyclable advantage offered by cans compared to other drinks packaging options, he noted: “Metals can be recycled indefinitely with no loss of quality. You can’t do that with other materials.” What’s more, he added, “Metal has value; it’s a traded commodity. A empty can will be sold like jewellery and used in cars, trains or building materials.”

Reporting that the average can recycling rate in Europe currently stands at “around 60%”, with the UK close to this mark, Revess pointed to the huge variations from country to country in this area.

Although highlighting Japan’s “extremely high” can recycling rate, and confirming that a number of European countries achieve a rate as high as 90%, Revess revealed: “the highest rate in the world is Brazil at 98% because all the street kids pick up cans.” By contrast, he remarked: “a lot of Western economies have extremely low recycling rates – the US is 58%.”

Comparing this recycling performance to other packaging materials, Revess suggested these levels are “similar to glass”, while “PET is lower and Tetrapak is lower too.”