Attendees of Vienna’s Fine and Rare Wine Specialist course were shown the evolution of Californian wine on day one of the education programme.

Vinfolio chairman Jean-Michel Valette MW led a tasting of wines from California at the outset of the fine wine education course, held at the Palais Coburg from 28 June, to highlight the region’s strengths and stylistic changes.

Speaking of the historical production of wine in the region, Jean-Michel began by recording the presence of two major historical wine categories in California: claret and Burgundy.

Claret was made mainly from Zinfandel, and Burgundy from Petite Sirah and Syrah, he said.

Interestingly, he added, “Burgundy was considered the bigger wine and claret the lighter, more elegant one.”

Moving to more recent times when labelling by grape variety was more commonplace, he poured a Mirassou Cabernet Sauvignon 1985, chosen to highlight the character of a mid-priced wine from the ’80s.

The wine, with a moderate alcohol and a touch of herbaceousness, showed a more restrained style of Californian Cabernet than might be made today at a similar price point, although Jean-Michel also said this was a period when later-picked grapes were beginning to become popular.

Hence, from the same decade, students were next shown a Silver Oak Cabernet Sauvignon from 1982.

Made by Justin Meyer, the wine marked what Jean-Michel described as “the beginnings of riper grapes and the use of new oak,” as well as the early years of pricey Californian Cabernets.

Following this came a magnum of Dominus from 1992, made using 60% Cabernet Sauvignon, as well as Merlot, Cabernet Franc and Petit Verdot.

Now entirely owned by Bordeaux’s Christian Moueix, Jean Michel said that the Napa Valley vineyards for this wine were some of the oldest in the region, and were once owned by John Daniels to provide grapes for the famous Inglenook Estate.

The Dominus label, launched in 1983, was designed to be drunk by people in Europe as well as the US, and it was made to rival the best wines in the world, said Jean-Michel.

However, he believed that the wine has been at its best since the 2001 vintage, and that earlier examples suffered from some unripe Cabernet Franc in the blend.

Summing up this three-wine flight, he said, “Napa Valley is the centre in the US for Cabernet Sauvignon and Bordeaux blends,” although he added that there were some high priced wines from top producers in Washington State that were rivalling Napa. 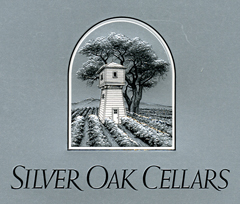 Also, speaking of the 1976 Judgment of Paris blind tasting when California Cabernets beat Bordeaux, he commented, “The biggest impact of that tasting was probably in the US – before that, in New York for example, they wouldn’t touch Californian wine.”

Jean-Michel then spoke briefly about Californian Syrah, Zinfandel and Chardonnay.

Having poured a Syrah from The Ojai Vineyard from the 1999 vintage, he recalled “a big trend” in the 80s and 90s when it came to planting Syrah, particularly in California’s Central Coast region.

“Both Parker and James Laube like the Syrahs, but they don’t sell very well,” he said.

Notably, Jean-Michel explained that many of the vines used for these plantings over twenty years ago were “suitcase Syrah”.

“You go walking in Côte-Rôtie or Hermitage, you see cuttings on the ground, and you put them in your suitcase.

“It’s not legal and it’s a good way to bring diseases into the country, but it was done a lot.”

Next was a 2000 Zinfandel from the Pringle Family Vineyard in Howell Mountain.

Speaking of the grape while the wine was tasted, Jean-Michel stressed the high-yielding nature of Zinfandel, and, as a result, danger of producing dilute wines.

However, when not overcropped, and particularly when harvested from 100 year-old vines, it can produce age-worthy reds. 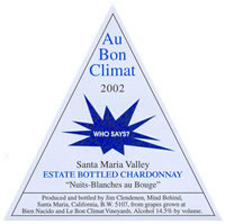 Further, in extremely old vineyards, the Zinfandel is usually grown intermingled with other varieties, such as Carignan, Petit Syrah and Alicante Bouschet, and when harvested and fermented together, the resulting wines are complex and long-lived.

Finally, the session turned to Chardonnay, which, along with Cabernet Sauvignon is the most planted grape in California.

Jean-Michel said he believed the region could make Chardonnay to approach the quality found in the best white Burgundy, and that “Carneros was the right place to make Chardonnay in California.”

The latter wine, from the 2009 vintage, was called Nuits-Blanches au Bouge, and was a blend made by Au Bon Climat winemaker Jim Clendenen out of frustration, according to Jean-Michel.

“He wanted to make something more restrained but people didn’t want to buy it, so he made a bigger wine with lots of oak and malo, that he didn’t like, but it sold really well.”

“Then he made the Nuits-Blanches au Bouge, which is a mix of both styles, and half way between the two.”

In general however, Jean-Michel spoke of a move among certain top producers to create a more restrained style of Californian Chardonnay.

For example, he said that Steve Kistler, from Kistler Vineyards, harvests earlier than others to get a naturally fresher style, while the most expensive Chardonnay in the Stags’ Leap range is unoaked.

Although he added, “The consumer still wants a lot of oak.”