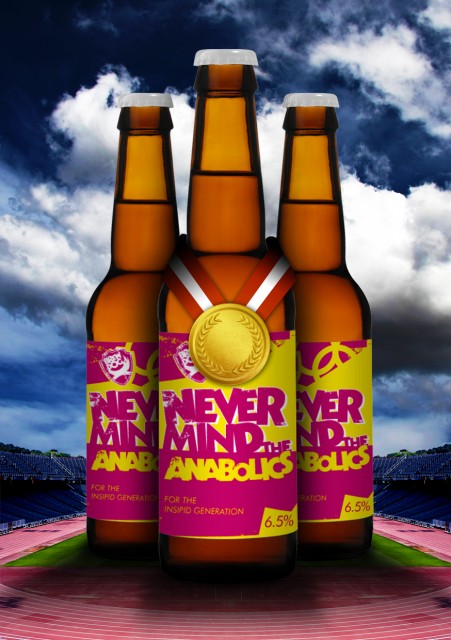 The brewery hopes this beer “will undermine global sponsorship deals for this summer’s games.”

Designed to “unmask the corporate beast of the world’s biggest sporting event and highlight the shallow nature of sponsorship”, the new beer contains creatine, guarana, lycii berries, kola nut, Gingko, matcha tea, maca powder and steroids – all of which are banned for professional athletes.

James Watt, cofounder of BrewDog said, “It seems a beer laced with performance enhancing ingredients isn’t actually illegal, but it is definitely frowned upon. However, we don’t think Never Mind the Anabolics is as absurd and obnoxious as the tenuous sponsorship deals from fast food chains and global mega breweries that seem to define the people’s games.

“A burger, can of fizzy pop and an industrial lager are not the most ideal preparation for the steeple chase or the dressage (for human or horse). So we decided to give the athletes something that was going to make them happier and better. A way to relax before a big event and at the same time, increase your chances of winning.

“Never Mind the Anabolics is a thorn in the side of the biggest corporate beast spawned this century. We don’t care what shampoo the athletes use, or what their favourite fast-food meal is, or even if they decide to drink tasteless, mass-produced fizzy yellow lager from global mega corporations – and if we did we wouldn’t believe the shameless advertisements peddling them.

“This is the craft beer community showing the sponsors of the games the finger in the best way we know how.”

A percentage of the proceeds of the craft beer is going towards a new surfboard for surfing dog called Abbie. BrewDog claims this is another “added snub to professional sports sponsorship.”