Rise of the young bloods

As economic forecasts in the West worsen, it is the BRIC nations that offer growth for wine suppliers, says Spiros Malandrakis at Euromonitor International 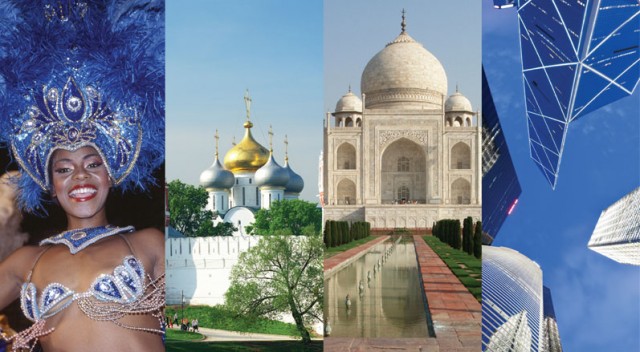 THE BRIC acronym has played the roles of regional cornucopia, marketers’ dream and bullish analysts’ projectile weapon of choice when attacking the glass house of Western saturation, complacency and diminishing opportunities. Coined by Goldman Sachs’ chairman Jim O’ Neill back in 2001 to merely highlight the shift of power away from developed markets towards the rapidly advancing big four emerging powerhouses, its relevance to the global wine industry today is greater than ever.

With its Western European bastion almost (double) dipping a toe in the murky waters of a fresh recession, US consumer confidence precariously volatile and inherent maturity issues across the Western world putting up mounting barriers to both volume and value growth, the BRICs are back in vogue. Will they be saving the day for wine as well?

Wine, as is the case for all alcoholic drinks categories, is far from immune to severe macroeconomic shocks. The EU might have officially – and narrowly – avoided a double-dip recession, but growth is literally hanging from a Greco-Germanic thread that could snap at any minute. 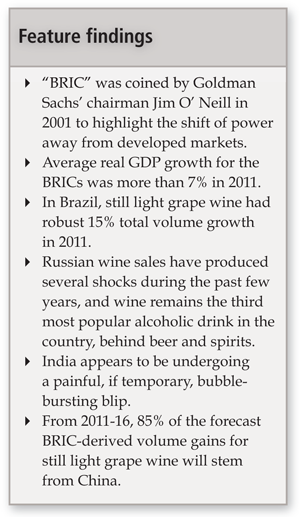 According to Euromonitor International, real GDP across the EU grew by less than 2% in 2011, while the US produced similar, largely uninspiring figures. On the other hand, average real GDP growth for the BRICs came in at more than 7%, vividly reflecting a similar divergence in real annual incomes, where discrepancies are actually even more visible and pronounced.

With contrasting performances such as these, it does not take a veteran analyst to highlight the concurring and expected shifts in priorities within wine producers’ strategic planning.

Furthermore, unemployment, by now a stalwart in the expanding vocabulary of the “new normal” alongside such concepts and phrases as “jobless recovery” and “contagion”, remains troublingly high across the West, while the BRICs already view it as an unpleasant, albeit distant, memory.

As if that was not enough, underlying demographic undercurrents are gathering pace, essentially making a bad situation worse across the West. According to Euromonitor International, the median age in the UK is 40 years, and in the US it is 37, while the average in the BRICs is just 32. The younger the audience, the greater the future expectation.

In other words, an embryonic – or, at best, underdeveloped – wine-drinking culture across the BRICs should be analysed within the favourable context of young, aspirational drinkers excitedly becoming part of the advancing middle classes to eventually embrace wine and democratise the already strong, higher-end demand emanating from the elites of their respective countries. It is either that or focusing on chronically unemployed drinkers in the West who are getting older while looking for alternatives to their increasingly jaded wine-drinking tradition. BRICs to the rescue it is, then.

In Brazil, the total volume growth of still light grape wine was 15% in 2011, an impressive performance that was stronger than the 2006-11 volume CAGR of 3%. Rising levels of sophistication, product diversification and generous investment in production capacity underpinned the category’s fresh leap forward. 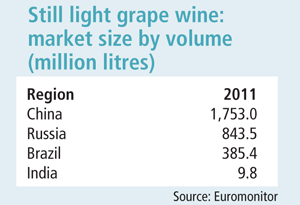 In Russia, according to Euromonitor International, wine remains the third most popular alcoholic drink, behind beer and spirits. The average Russian drank 77 litres of beer, nine litres of spirits and seven litres of wine in 2011. In addition, Russian wine sales have produced several shocks during the past few years, a fact inevitably preventing more robust growth. The ban on imports of Moldovan and Georgian wines has led to changes in consumer preferences, and opportunities for established New and Old World producers will continue to rise to the extent that they can successfully escape the Kremlin’s infamously suffocating embrace.

Conversely, India appears to be undergoing a painful, if temporary, bubble-bursting blip. While the long-term prospects for wine sales in the country remain solid, over-optimism is taking its toll momentarily. The 5% total volume growth registered in 2011 was significantly lower than that of the previous year. Overproduction and reduced demand have led to slower growth, while the imposition of heavy taxes by state governments has driven unit prices sharply upwards,
a fact that in turn makes wine a drink that for many can be consumed only on special occasions. More than half of the wineries in Maharashtra have closed down. Close to 25 million litres of wine are lying unsold. Manufacturers are dumping their products on the market with heavy discounts. But then again, this is the inevitable end of any unsustainable bubble. With per capita consumption practically negligible, the only way is up. 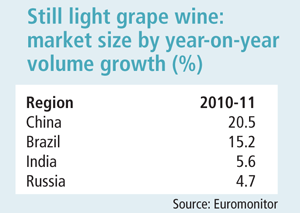 And then there is China. From Lafite constructing a winery in the country to every brand ambassador this side of the known universe feverishly trying to build inroads and establish contacts, joint ventures and distribution partners, the world of wine is truly under China’s heavy shadow. The gifting ritual, the perceived positive cardiovascular properties of red wine, and the cultural references to the lucky colour red and the number eight, have been overanalysed in the trade press and beyond.

The key numbers to remember are these: between 2011 and 2016, 85% of the forecast BRIC-derived volume gains for still light grape wine will stem from China, according to Euromonitor International; furthermore, nearly nine out of every 10 bottles sold across the BRICs during the same period will be red grape wine.

There might be legislation-induced volatility, taxation-hit consumption or temporary swings in drinking patterns, but one thing is certain. As the West continues to suffer stagnation or outright declines, the global wine industry’s hopes are tied to China’s ascent and the red tide rising.