Molson Coors has invested £6.3 million in new state-of-the-art packaging technology, a move that will see Carling packaged in film instead of cardboard. 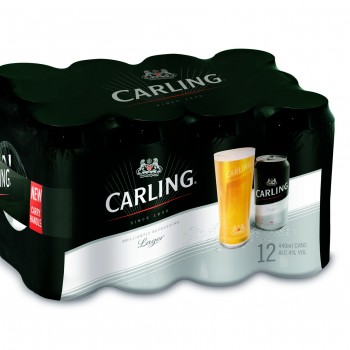 The move to packaging in film will reduce the weight of secondary packaging by 63% and reduce carbon emissions by 4%.

As well as the carbon and weight benefits, ink coverage has been restricted to less than 5% of the overall packaging weight so the film can be 100% recycled.

Part of the innovative packagings is a carry handle on larger pack sizes which will help make the product easier to handle for shoppers.

This investment is part of a multi-year redevelopment programme in which Molson Coors has increased capital investment into its brewery network by an additional £15 million a year over five years, with the majority of this investment being spent in Burton-upon-Trent.

Jim Shaw, head of supply chain strategy and change at Molson Coors (UK & Ireland) said: “This new packaging technology is the latest milestone in our plans to drive innovation to ensure we meet the future needs of our customers and consumers, while being as energy efficient as possible.

“We are the first major UK brewer to invest in this technology on such a large scale, and it is another step in our five year plan to redevelop our largest brewery and the UK’s biggest, based in Burton-upon-Trent.”

To compliment the new packaging initiative, design consultancy, Echo, has designed a new creative visualisation of Carling that incorporates the Union Jack and will feature across Carling’s outdoor, print, and TV advertising.

Under the “Brilliantly British. Brilliantly Refreshing” campaign, the new look will also be used on limited edition retail packs of 10, 12 and 20 Carling cans.

Echo has also designed an exclusive limited edition pack for Sainsbury’s featuring the Carling can with droplets over a monochrome Union Jack.