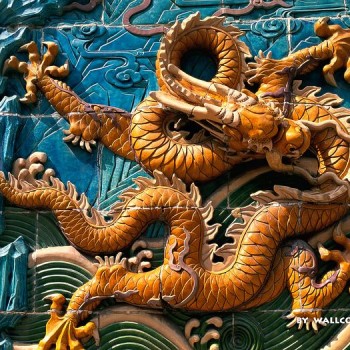 The Armagnacs are bottled at cask strength and only 600 bottles of each are available.

The labels of each vintage feature a different dragon, the designs of which are copied from dragons decorating the walls of the Forbidden City in Beijing (pictured) and each is given its own character as well, 1988 is earth, 1976 fire and 1964 wood.

The new range is part of Janneau’s new focus on vintage Armagnacs which are becoming increasingly popular – as with other spirits – and this range will not be a one off.

Speaking to the drinks business, Janneau’s managing director, Fabio Giovinetti, said: “It is something very new for Janneau, we have never focused very much on vintages but the demand is growing.

“The release is worldwide so there will be bottles for every market and every year now we have plans for a new vintage release.”

Considered the luckiest year in the Chinese zodiac, the vintage release comes as China itself becomes the world’s largest Armagnac market.

‘The market in mainland China has increased three fold,” he continued. “This is partly to do with a scarcity of Cognac but it is also part of a wider trend towards Armagnac. We have seen growth across all our markets in the last 4-5 years.”

In terms of what is needed to sell in Asia, Giovinetti said the strategy has to be about “premium” positioning and companies need to take education on themselves.

“The positioning has to be premium here, don’t undersell yourself,” he said. “You need to focus on good quality and at a premium price. There is a demand for cheaper products here too of course but if consumers want that they can buy local spirits.

“We’re aiming to sell XO and and at a premium price. you can sell volume in time.

“This market has sorts of demands but it’s up to us to educate it. In Asia wine is Bordeaux and spirits Cognac and we have to draw on our similarities at first and then as the market evolves we can get into the differences between wines and distillation and so on.

“To begin with, just understanding that we are a different AOC and from a different region is enough.”