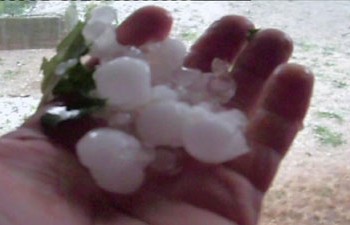 The vineyards around the villages of Pignans, Carnoules, Flassans-sur-Issole, Carcès, Besse-sur-Issole, Brignoles, Correns, Cotignac and Le Val et Montfort-sur-Argens in the central Var were at the centre of the storm.

For some vineyards, the hail was violent enough to not only destroy this year’s harvest but also those of next year and possibly even 2014.

In a primary survey, around ten co-operatives and between thirty to forty independent domains have been affected.

A special committee has been set up to evaluate the damage to the individual wine domaines and for compensation to be available. Local mayors have asked for a state of natural catastrophe to be declared.

The President of the ‘Syndicat des Vignerons du Var’ said he had never seen a hail storm of this violence. The minister of Agriculture, Stéphane Le Foll, is looking into the extent of the damage, promising support for those hit by the hail.