Has the “King of the Good Times” got his back to the wall? 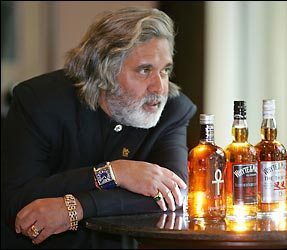 The fact that VJ Mallya, the head of UB Group, which includes United Breweries and United Spirits, India’s two largest drinks groups, is looking to raise $225 million via a bond issue backed by his spirits business has raised more than a few eyebrows, largely because it would make only a minor dent in UB’s debts.

Mallya’s rise to fame has been a parallel of his burgeoning business interests.

Never one to shun the limelight, he is regularly photographed with Bollywood stars and relaxing on his private yacht.

He inherited UB in 1993 on the death of his father and has relentlessly expanded. His business tentacles now range from Whyte & Mackay Scotch and Bouvet Ladubay in the Loire to the Force India F1 racing team, the Royal Challengers Bangalore IPL cricket franchise and Kingfisher.

But while that brand accounts for more than 50% of beer sales in India, it is the airline of the same name that is Mallya’s biggest headache.

Last month the Kingfisher airline halted international flights on the back of rising fuel costs and with debts soaring by $1 million a day.

A cut price domestic airline had previously failed. Now Mallya is hoping that the Indian parliament will approve a law allowing foreign carriers to take stakes in the country’s airlines.

The vote may come as early as Thursday and if the plan is turned down Mallya’s cash problems will become painful.

United Spirits, which also includes Vladivar vodka, has debts of about 80 billion rupees (about £1.5 billion) and the proposed bond issue has been put on hold pending publication of UB Group’s delayed accounts.

Over the past month investors have pushed UB’s shares 30% higher on hopes of a solution to the cash flow problems.

But major Asia brokerage CLSA downgraded them last week, saying that it expected fourth-quarter earnings to be 18% lower than last year’s because of higher input costs and that there was “not much fizz” left in the equities.

The spirits company dominates the Indian market with sales well in excess of 100 million cases while United Breweries controls more than 60% of the brewing capacity in India.

At face value that would suggest that any global group seeking to make rapid progress in the country would consider at least a strategic alliance with Mallya’s empire.

It is no secret that tentative discussions were held a year or so ago with Diageo, but the world’s biggest beverage alcohol group walked away. Chief executive Paul Walsh said publically at the time that his valuation of the business was “very different” to Mallya’s.

More recently he has thrown further cold water on speculation of a deal by saying that he was very happy with Diageo’s progress in India.

Such is UB’s debt servicing problem that reports from Bangalore suggest that Mallya is now willing to sell a stake in his flagship brand Whyte & Mackay to ease the problem. He bought it for $1.7 billion five years ago, which at the time was thought a very full price.

Only a few months later a contract to supply Scotch in bulk to Diageo was not renewed and consequently Mallya pulled out of that market.

That meant moving W&M upmarket at the very same time as global brand premiumisation was in full swing. Mallya is no stranger to the strategy but Whyte & Mackay has struggled to cover the leverage debt Mallya used to buy it.

The latest travails would depress the price Mallya might expect for a part of W&M. But would any major rival want a minority voice in a business that might by itself open very few doors in India and is at the same time remain controlled by the colourful Mallya?

Sale to an investment house is a possibility, but they favour companies they can revive rapidly. A minority interest would hamper scope for such a tactic. It is a conundrum Mallya has yet to solve.