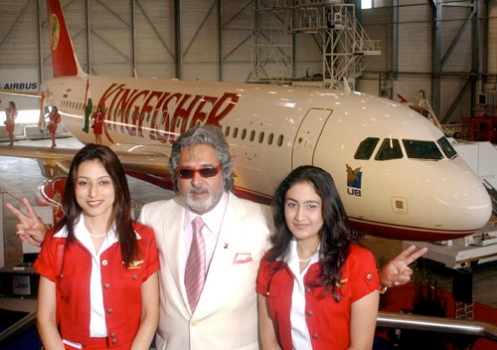 Kingfisher Airlines is laden with debt to the tune of US$1.3 billion and has announced an end to all international flights throughout the summer, though it will continue to operate domestic flights within India.

The airline was recently suspended from the International Air Transport Association (IATA) following a freeze on its bank accounts by tax authorities.

Mallya said after a meeting with India’s civil aviation authority: “We have decided to suspend our international operations as we are not on IATA platforms.”

Another smaller airline formerly owned by Mallya, Air Deccan later rechristened Kingfishers Red, was shut down in 2011 due to financial difficulties.

The situation is so severe for some companies that some papers have even carried stories recently of passengers made to pay extra for the fuel if they wanted their plane to take off.

Mallya is the chairman of the United Breweries Group and as well as owning a brewing empire and – now struggling – airline, he is the co-owner of the Formula 1 team, Force India, and the Indian cricket team Bangalore Royal Challengers, as well as two Indian football teams.

In May 2007, United Breweries announced that it was buying Scotch whisky maker Whyte & Mackay, making the distilling arm of the business one of the largest in the world.