City boy racks up most expensive bar bill in the world

A young financier splashed out over £200,000 on drinks at a Liverpool nightclub, breaking the world record for the highest bill ever paid in a club.

23-year-old Alex Hope spent £125,000 on a 30-litre Midas bottle of Armand de Brignac, known as Ace of Spades – the world’s most expensive bottle of Champagne.

The 45kg bottle had to be carried to the table by two waiters.

He spent a further £80,000 on other Champagnes, vodka, beer and mixers for guests including Manchester City footballers Joe Hart and Adam Johnson and Manchester United star Wayne Rooney’s wife Coleen at the PlayGround nightclub at Liverpool’s Hilton Hotel.

Hope also ordered a further 40 75cl bottles of Armand de Brignac – the Champagne endorsed by rapper Jay-Z, and handed them out to single women in the club.

One clubber observed: “He didn’t seem to be drinking a lot and looked totally sober.” 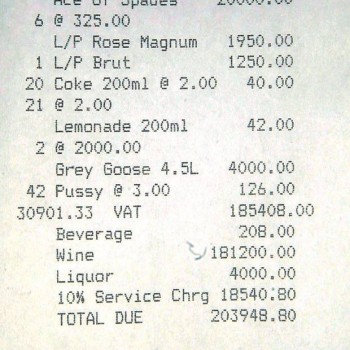 “It caused a bit of a stir. We have some of the best Champagnes in the world, but nothing like that. Everyone was talking about it and wondering who on earth this guy could be,” admitted one member of staff.

The day after, Hope boasted on his website: “Just opened the world’s largest Ace of Spades bottle at the PlayGround. Great night! Miami Next!”

After just three years in finance, Hope is well known in the industry as a high flyer, and has been tipped by many to become one of the biggest traders in London.