Glass promises to suit all Champagnes

A glass is being launched in the UK which promises to be the perfect shape for Champagne, whatever the style.

First manufactured in 1999, the glass has been created by Champagne specialist Richard Juhlin at Sweden’s Reijmyre Glassworks, and has, until now, only been sold in Sweden, although it is used by a handful of Champagne houses.

Bringing the glass to Britain, and other key Champagne markets outside Sweden, is Margareta Dale, who has set up a distribution arm for the glassworks, and website for the UK, in December last year.

Speaking to the drinks business, Dale explained that the glass “Gives a better experience than drinking from another high end Champagne glass, and it’s been designed by Richard primarily for his own use when tasting and grading Champagne.”

The glass (pictured) has also been made to look “elegant”, with an elongated appearance so drinkers can watch the stream of bubbles rise to the surface.

However, its convex sides and narrow rim allow the Champagne to be swirled, while ensuring the aromas are concentrated at the top of the glass.

“The idea of the glass,” added Dale, “is that it’s good for all styles of Champagne, it is a reference point, so you can have one glass for every Champagne you try.”

The glasses are hand-blown at Reijmyre, a Swedish glassmaker founded in 1810, and are made from glass, not crystal, with a retail price of £55, although discounts are available for multiple orders. 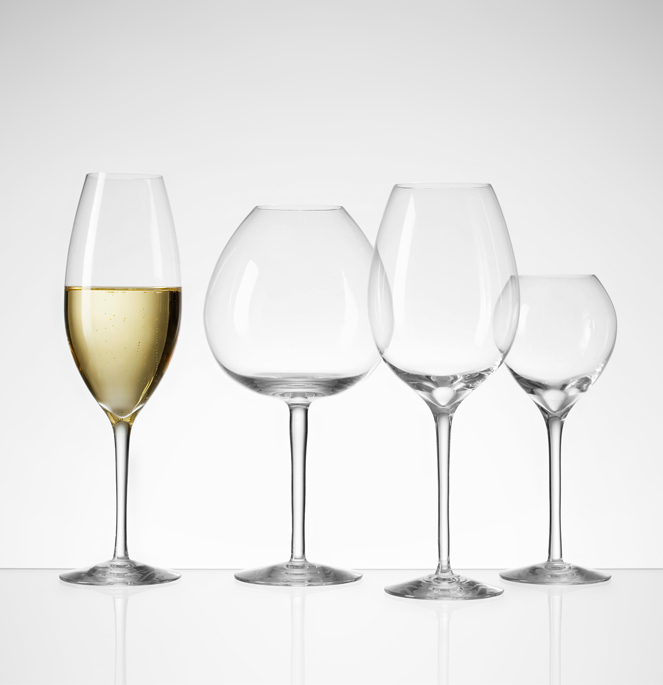 The Champagne glass forms part of the Richard Juhlin collection (pictured, left), comprising a further three glasses, one for whites, another for reds and a final version for pudding wines.

The range is engineered, Juhlin says, to be “aesthetically pleasing,” as well as enhancing the aromas for each type of wine.

Richard Juhlin is a Swedish freelance journalist who specialises in Champagne and holds a world record for the number of Champagnes he has tasted.

He is currently working on a book entitled Eight Thousand Champagnes, which will be published in the next few years.