Champagne houses are moving away from using traditional flutes for their fizz in favour of white wine glasses, according to glassware manufacturer Georg Riedel. 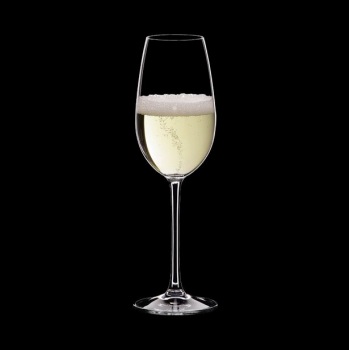 “The Champenois are starting to serve their sparklers in white wine glasses as the larger surface areas give more aromas, complexity and a creamier texture,” Riedel told the drinks business.

“Flutes are too narrow and don’t allow the aroma and richness of the Champagne to shine as there isn’t enough air space,” Riedel added, revealing that flutes are often mistakenly filled to the top, leaving the wine no room to breathe.

“Ideally, a flute should only be half full, or, better still, a third full in order to release a Champagne’s aromatic potential,” he said.

In response to demand, Riedel has started making bespoke glasses for several Champagne houses and has developed a new sparkling wine glass more akin to a white wine glass.

“Our new glasses (pictured) don’t look anything like a traditional flute. They’re much bigger and rounder,” Riedel told db.

In contrast, as reported by db in mid-December, Pierre-Emmanuel Taittinger, speaking at a Master of Wine event in London, stressed the need for Champagne to retain the flute to differentiate the sparkling product from still wine.

“Champagne is not only a wine but a symbol of love and generosity and if we forget that we are dead,” he stated.

Continuing, he referred to a battle with “marketers” who, he said, “want us to drink Champagne in a wine glass.”

“But we have a specific glass… and Champagne is not a wine but a great symbol,” he explained

Meanwhile, Georg Riedel said that he has his sights firmly set on China, where he is keen to grow the Riedel brand.

“China is a new market for us and our hopes are high for it. We’ve been established in Hong Kong for a while, but it’s time to move our marketing subsidiary to the mainland.

“We want to get into the top hotels and restaurants in China, and start branching out into department stores,” he said.

Riedel is confident that the Chinese will embrace the idea of buying different glasses for different wines.

“Contrary to what has been said, the Asian palate doesn’t differ from the Western palate. Wine is new to them, but they understand it.

“You start life as a milk drinker, then you evolve. An understanding of the complexities of wine comes with a certain age. It’s a celebration, and people love to toast in Asia,” he said.