With a tireless work ethic and an impressive roll call of brands on her CV, including eight years with Veuve Clicquot, Cécile Bonnefond is relishing the challenge of restoring Charles and Piper-Heidsieck to their former glory, writes Nicholas Faith. 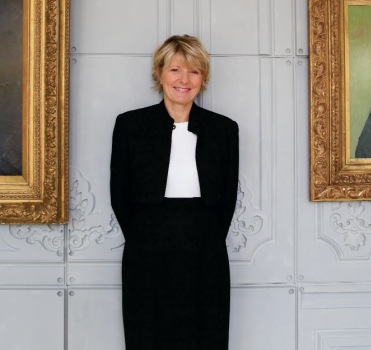 Watch this space. There’s a new CEO of two major Champagne brands, and one who has previously run one of the region’s giants.

She is working for new owners, prepared to look long term, operating from handsome new premises and offering some great wines. What’s not to like? It’s too early in the new regime to tell what exactly will happen to Charles and Piper Heidsieck, the two brands involved, but it could provide some of the most exciting news of 2012.

The CEO involved is a woman and one who was a total outsider when she first arrived 10 years ago to run Veuve Clicquot for eight years.

She returned this summer a mere six weeks before the earliest vintage in years to take charge of Piper and Charles Heidsieck.

But then Cécile Bonnefond is a remarkable woman: blonde, charming but clearly not one to suffer fools at all, let alone gladly; a believer in a clean desk, disturbed by a mess.

If not a workaholic, she’s someone who takes two bulging briefcases home for study over a long weekend, demonstrating an almost American attitude to work. Her credo, “quality and profitability”, backed up by a concentration on “detail, precision, creativity” is not surprising, nor her belief that she has “a real taste for managing teams whatever the weather”, accepting that such a taste “requires personal commitment”.

Bonnefond had a thorough education in business, culminating in a spell at the choosy and prestigious London Business School and then had a 20-year grounding in the rough environment of the mass food industry.

The way she talks of her career shows clearly that her real joy lies in innovating, in changing things. She started early: at Danone, where she worked for five years, she helped start a revolution in French breakfasts – above all in weaning French children from their previous diet of bread and hot milk onto the joys of yoghurt – and corn flakes.

For her big break came at Kellogg’s, where she spent 10 years building a business which started with a mere dozen executives selling only corn flakes. She made her mark in helping broaden the business and ended up running a totally new subsidiary in Italy.

For the next five years she ran a bakery business for Brossard, a subsidiary of the British giant, Grand Metropolitan, a period during which she learned to cope with strong trade unions, who once barricaded her in her office for 36 hours. After Grand Met sold Brossard to Sara Lee, an invitation arrived out of the blue which she could not refuse.

It came from Philippe Pascal to replace him at Veuve Clicquot after he had been promoted to run all LVMH’s Champagne businesses. Why did he take such a bold step? “Well,” she says, “I knew all about major brands – as did some other recruits into the industry – I had coped with unions as strong as those at Clicquot, and as a woman I could bring a new perspective into the business, and I have to say I found happiness there.”

The joy was not immediate; Jacques Peters, Clicquot’s legendary chef de caves, told her bluntly that “if I didn’t measure up to his expectations within six months he would retire”.

She did, he didn’t – and she was indeed due to have dinner with him the week after my interview with her. While Bonnefond continued the many changes Pascal had initiated she feels that whereas his style had been intuitive, she brought “precision and process” to the table.

Bonnefond is proud of the way she “stamped every aspect of the brand with yellow to paint a happy world” and, more seriously, ensured that the image of the brand “was modernised” to symbolise classy enjoyment and achievement.

After eight happy and successful years at LVMH she was snapped up by the Descours family, owners of Entreprise Patrimoniale d’Investissements, a little-known privately owned French group of luxury products.

In early July 2011 EPI had bought the two Heidsieck brands for an estimated €412 million (£353m) from Rémy Cointreau, for whom it was clearly not a core activity.

EPI had been founded in 1974 by Jean-Louis Descours, still active at 95, whose main business was the Andre brand of mass-market shoes, and is now run by his grandson the 37-year-old Christopher Descours.

Recently Descours has aimed decidedly upmarket. In 1990 EPI bought Francois Pinet, the French distributor for Ferragamo shoes and in the past five years has accelerated its purchases, notably Alain Figaret, a maker of dress shirts, and, far more significantly  Bonpoint, a chain of stores for fashionable children – or rather parents – with 80 stores from Jeddah to Sloane Street.

Fortunately the Descours family was not a newcomer to the world of wine. Back in 1981 the founder indulged in the purchase of a lovely property, Château La Verrerie in the Luberon, south-east of Avignon. At the time the grapes were sent to the co-operative, but he soon started to make his own wine and today one of his wines is rated among the top 10 Syrahs of the world.

The Descours family was lucky to inherit far and away the most imaginative and successful new premises built by the Champagne industry since 1945, uniting the two brands and taking them from their historic homes within Reims to the outskirts – though Rémy restored Charles Heidsieck’s art deco premises to use for entertaining.

The new buildings were designed by Jacques Ferrier, responsible for that glory of French engineering, the delivery hall of the Airbus factory in Toulouse.

Apart from the winery, Ferrier designed a massive, beehive-like headquarters building which, as the author of the press release puts it, obviously after imbibing a tincture or twain of the sparkling stuff, “A mesh of metal covers this airy glass building. The open, golden rectangles gives the impression of bubbles clinging briefly to the side of a crystal Champagne flute. A sparking, lacy effect, constantly moving and singing in the light.”

But Bonnefond was clearly more impressed by the wines than the building. Their qualities are the result of an extraordinary couple, the far-sighted André Hériard-Dubreuil, of Rémy Cointreau, who had bought the two brands in 1985, and Daniel Thibault, the firm’s winemaker and the nearest thing to a genius the region has seen since the war.

To transform the quality of the wine, Hériard-Dubreuil allowed sales to fall by millions of bottles so that Thibault could build up some reserve stocks, above all of Charles Heidsieck. Whereas most houses have only a few vintages at their disposal for the production of their non-vintage wine, Thibault had over eight. He blended these older wines into the non-vintage cuvée.

Twelve years later the new-fangled Brut Réserve was relaunched as the Brut Réserve Mise en Caves. This change enabled Thibault to provide a date of cellaring on the label, so the first release, the Mise en Caves 1992, included 40% reserve wines and 60% of the 1991 vintage. Heidsieck has continued the model, providing more exact information for the buyer who now actually knows exactly what he is buying.

After Thibault’s early death in 2002 Régis Camus took over both brands. He’d been largely responsible for Piper-Heidsieck since his arrival eight years earlier. Bonnefond is duly grateful. “He’s reinvigorated the brand,” she says, “it’s enjoyed a renaissance in quality, thanks partly to Camus’ discovery of a source of very vineux Pinot Noir in the Aube.”

Indeed Camus has followed Thibault in being named Sparkling Winemaker of the Year by the International Wine Challenge for several years, while the wines from both brands have scored extremely high marks on both sides of the Atlantic.

On arriving soon after the takeover, Bonnefond was shocked that despite the flourishing sales at Piper, the group, almost uniquely among major Champagne firms, was making a loss.

Yet, according to the International Wine & Spirit Record, last year Piper sold 390,000 cases outside France, making it the third biggest brand in the wider world. By contrast Charles Heidsieck is a very minor brand with a mere 19,000 cases of sales in France and 52,000 outside “l’Hexagone”.

It is too early for Bonnefond to give her precise ideas as to how she proposes to restore the wines to their former glory. Her first priority is to restore the brands to profitability and this will certainly involve a prompt halt to any discounting, above all of Piper in France, where it is only ninth in the pecking order, selling 78,000 cases. This represents a mere 16% of the total, but then France represents just 9% of the brand’s total sales.

Bonnefond is going to market the two wines quite separately to reflect their very distinct qualities, which will be the job of her first hiring, a new marketing director, with whom she worked when she was at Clicquot.

Bonnefond is naturally ambitious for both brands, planning to ensure that “they reflect their long heritage dating back to 1785” – when the first member of the Heidsieck family arrived in Champagne.

For Charles Heidsieck, above all, she is ambitious to compete with the far better-selling Bollinger and Roederer. As I said, watch this space.