Scientists have identified more than 20 chemicals that make smoke-tainted wine taste like disinfectant and other unpleasant flavours. 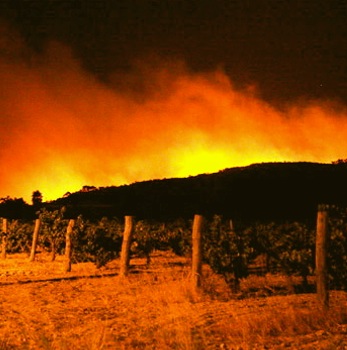 The AU$4 million research project aims to limit the damage to the wine industry caused by smoke.

Researchers at the Victorian Department of Primary Industries hope that the findings will lead to better timing of controlled burns and the creation of an online tool that will help growers assess the likelihood of their grapes having been damaged by smoke.

Senior research scientist Davinder Singh said the problem of smoke taint emerged in the wake of the devastating bushfires of 2003, which caused some vineyards in north-eastern Victoria to be affected by smoke for three months.

”When they made the wine out of it, it had a very unpleasant aroma of bacon, disinfectant, leather and ash, with a metallic flavour at the back of the tongue,” he said.

Smoke affects grape varieties differently, with Sangiovese one of the most susceptible to smoke taint, Singh said.

De Bortoli winemaker Steve Webber said the winery lost almost the entire harvest at its King Valley property because of smoke taint in 2007.

Two years later, smoke from the Black Saturday bushfires had a substantial impact on De Bortoli’s Dixons Creek vineyard in the Yarra Valley.

“There’s no question, we’ve got to have more of an understanding of it. I think this is a nice start,” he said.

Webber said bushfires in Australia affected grapes in a different manner to the experience of overseas bushfires.

”It’s those compounds that come from the gum trees that we believe are the things that cause the problem,” he said.