A bottle of Glenfiddich Janet Sheed Roberts Reserve has set a new record for a Scotch whisky sold at auction. 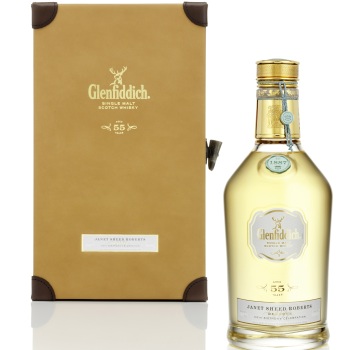 Fetching £46,850 at the Bonhams sale in Edinburgh last week, the 55 year-old whisky smashed the previous record to become the most expensive bottle of the spirit ever sold at auction.

Only 11 bottles of the reserve were produced to celebrate the 110th birthday of Janet Sheed Roberts, the granddaughter of the Glenfiddich founder William Grant.

The previous record was £29,400 and all of the proceeds from the sale will be donated to the charity WaterAid.

Glenfiddich uses only one spring for water in its distillation process and so partnered with the international charity that seeks to bring safe, clean water and sanitation to those without access to it.

Peter Gordon, Glenfiddich chairman and great-nephew of Janet Roberts, commented; “We’re thrilled the sale of this very special whisky raised such a significant amount of money for WaterAid. The Glenfiddich Janet Sheed Roberts Reserve is one of the rarest and most precious whiskies we have ever made.

“It’s a truly remarkable liquid, which would be impossible to make without the purity of Robbie Dhu spring water. It seems fitting to use our most special whisky to raise money for such a special charity.”