The world’s first paper wine bottle is to be launched in the UK. 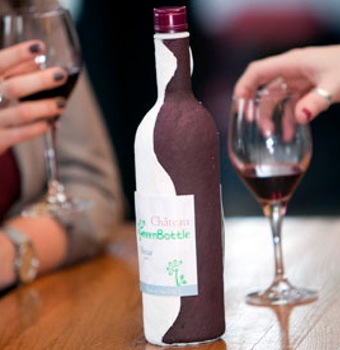 GreenBottle, the company behind the product, is in talks with a leading supermarket chain and says the eco-friendly bottle will be on the shelves early next year.

The paper bottle weighs a mere 55g, just over a 10th of the weight of a 500g glass bottle, meaning transport costs will be hugely reduced.

In addition, the compostable bottle’s carbon footprint is 10% of that of a glass bottle.

GreenBottle already manufactures the world’s first paper milk bottle, which is being tested in select Asda stores and is proving popular with ethically minded customers.

“Where available, they are outselling milk in plastic bottles by two or three to one,” said the Suffolk-based inventor of the bottle Martin Myerscough, who created the product after a waste tip supervisor told him plastic bottles were the biggest problem in his job.

Myerscough has retained the wine bottle shape in an attempt to reassure consumers. “We can be more radical, but we don’t want people to be too scared about it. If we are going to change consumer habits, we need to lead them along gently,” he explained.

The bottle features a similar bag to that found in wine boxes so the drink is kept fresh. “All you need to do is rip out the plastic lining and put the paper outer-casing in the bin or on the compost heap.”

The intention is to sell the technology to companies, allowing them to build bottling plants next to their manufacturing sites and cut down on transport times. The current machinery is capable of producing 50 milk bottles a minute and is patent protected.

Gerard Basset MW MS OBE, owner of hotel TerraVina in Hampshire, is all for the product, but doesn’t see a future for it in the fine wine sphere: “If the packaging will save time, money and is better for the environment, why not? But I expect it will only find favour with commodity wine. I can’t imagine it will ever take off for fine wine.”