Former Texture chef Ollie Dabbous is due to open his first solo restaurant venture early next year in London. 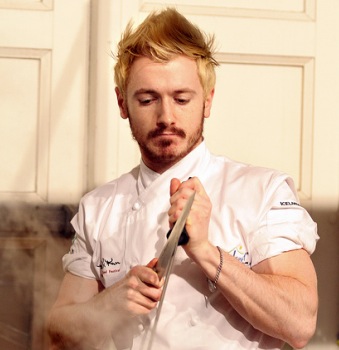 Having left the Michelin-starred Texture, Dabbous (left) has joined forces with mixologist Oskar Kinberg, who previously worked as bar manager of the Cuckoo Club.

Together the pair are promising what Dabbous called “a more modern and informal alternative to many of London’s fine dining restaurants.”

Called Dabbous, the two-storey venue will be located on Whitfield Street, which forms part of the busy restaurant hub around Charlotte Street in the West End.

In common with several recent openings in London, dishes will be served in smaller portions, priced from £4 to £14. Customers can also choose from a tasting menu and set lunch menu.

With the wine list, the aim is to be “varied but concise”, but with a “slight bias towards crisp, perfumed” styles, many of which will be offered by the glass.

Downstairs, Kinberg will serve up a mix of classic drinks and his own creations, many of which use a selection of his own homemade sugars and influsions. Signature cocktails include “Dillusion”, a blend of cucumber, elderflower and dill muddled with Bloom gin, ice and lemon.

The full restaurant menu will also be served downstairs, along with a limited selection of bar snacks. The area will be made available for private hire.

Outlining his aim to provide a “high standard of food and drink, friendly but attentive service and relaxed atmosphere,” Dabbous emphasised: “Prices will be reasonable and there will be no fuss or pretentiousness. Above all, we want guests to feel welcome, not imtimidated.”

Dabbous will be open from Tuesday to Saturday.