The team behind London restaurant Kettner’s have opened a restaurant in Egham, Surrey. 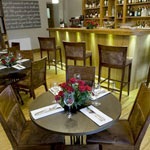 Called Hugo’s, the high street venture launched at the beginning of the month, taking its inspiration from a popular 1950s West End Italian restaurant of the same name.

Open for breakfast through to evening cocktails, the Mediterranean-influenced menu includes dishes such as venison sausages, raviolini with porcini and gratinato of scallops. There is also a daily specials board, dubbed “Hugo’s Choice”.

Ronchetti has compiled a wine list with a focus on small European growers and supporting “environmentally friendly” producers, many of whom are organic or biodynamic. The majority of bottles come in below the £25 mark, with many priced below £20.

The cocktail list keeps to the restaurant’s Italian roots, with a range of Bellinis, which includes the classic peach-based option in addition to creative twists such as The Milanese, incorporating Campari and orange juice.