People are starting to taste and talk about oysters in the same way they do wine, according to Boisdale owner Ranald Macdonald. 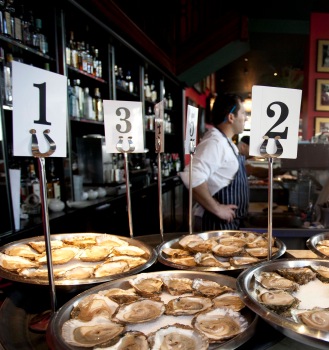 Speaking at the naugural Boisdale and Wright Brothers Oyster Olympics, Macdonald hailed the dramatic improvement in people’s appreciation of the shellfish.

Poole in Dorset and Loch Ryan in Scotland have emerged victorious in the Oyster Olympics, scooping gold medals in the rock and native categories respectively.

Oysters were judged on appearance, meat-to-shell ratio, flavour and minerality.

Maldon took silver in the rock category, while Duchy of Cornwall came second in the native group.

“The days of people ordering half a dozen oysters are long gone; now the discerning shellfish lover wants to talk about an oyster’s flavour profile, its provenance and production,” Macdonald said.

“People know their Maldons from their West Merseas, their Colchesters from their Caledonians. Diners are starting to taste and talk about oysters as they would wine,” he added.

Lovers of the molluscs can taste all oysters with podium places on Boisdale’s “Six Medal Plate”, available for the duration of the Boisdale and Wright Brothers Oyster Festival, from 8 November to 1 December.