As if our UK celebrity chefs weren’t prolific enough, London is now drawing them in from across the pond. 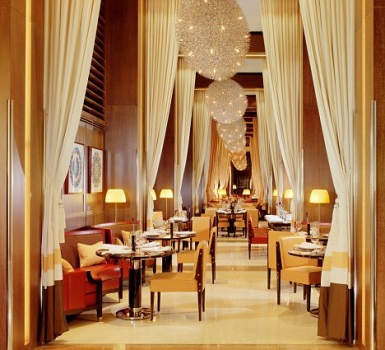 But you have to admit they’re arriving in style: just look at Wolfgang Puck’s first foreign venture, which has set up shop on Park Lane.

Squeezed into a narrow corridor on the ground floor of new five star hotel 45 Park Lane, Cut presents itself as a “modern American steak restaurant”.

Five years ago, this might have been a novel selling point – as would the celebrity chef tag – but London is now well catered for in both departments. Would Cut deliver on the fine detail to justify adding to the mêlée?

Mirrors and some fabulous overhead lights neatly distract from the fact that this is an unlikely space into which you would consider squeezing a restaurant. As we walked through to our table, a smell of smoked meat lingered on the air, a warning to any vegetarians who missed the hint in the name.

A glass of Billecart Salmon rosé, some deliciously cheesy gruyère gougères and exceptionally tasty grissini sticks later, we managed to come to some menu decisions.

It’s more than usually difficult to avoid filling up on bread here before you’re out of the starting blocks. Between us we worked through the basket: from crusty, yeasty sourdough to perfectly seasoned, olive oil-doused onion focaccia and some less exciting olive bread, it was touch and go whether we’d make it to the main course.

Despite the protein onslaught awaiting me, it’s not every day you see veal tongue on a menu. Nor did they hold back on the portions: five large, perfectly cooked slices arrived, drizzled with vibrant salsa verde and bulked out still further by the beans nestling underneath.

The flavour was delicious, but eating something with exactly the same texture as your own tongue does make you chew rather nervously to make sure you’re chomping on the right one.

My friend, a highly overqualified chef in her own right, loved her Dorset crab and lobster “Louis”, which she described as a “posh prawn cocktail”.

The wine list here has to offer one of the top Californian selections in the country. Sommelier Vanessa Cinti, fresh from the Ritz Carlton Colorado, has put together a cellar which name checks the most famous and respected producers from across the state, but especially Napa and Sonoma, with a good selection of back vintages in many cases.

The list also makes forays further north into Oregon and Washington state, with enough decent value bottles available (at least by Park Lane and Californian standards) that don’t make those trying to keep the meal under £100 a head miss out on all the fun. 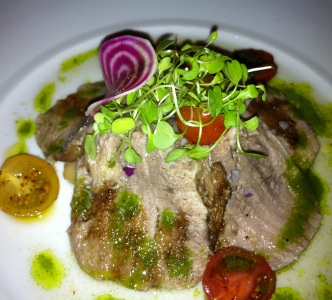 On top of this US USP comes a selection of smart Old World classics and, rather pleasingly, a fair few Austrian whites – no doubt a reference to Puck’s own origins, which probably explains the kaiserschmarrn on the menu too.

We stuck to the interesting selection of wines by the glass. I started with the Hartford Pinot Noir 2007 from Sonoma. It pushed over a little too far into the cooked strawberries, very ripe Pinot style so often associated with California, but still had enough youth on its side to retain some bounce.

My friend paired her rich seafood dish with the Domaine Drouhin “Arthur” Chardonnay, which flew the flag elegantly for Oregon.

Having agonised over the main courses, we decided to hold an extravagant taste-off between two rare rib eye steaks: the USDA accredited Black Angus from Kansas, weighing in at 14oz and £42, and the mighty Wagyu from Chile, whose delicate 8oz body neverthesless tipped the scales at a wallet-melting £85.

The USDA won by miles. Full of flavour and meaty, but still beautifully textured, it was a serious bit of steak to rival all the other examples fighting it out around London at similar prices.

Perhaps it was overawed by the hype and price-provoked expectation surrounding its arrival, but the Wagyu failed to make an impact.

That famously marbled, melting texture was there, sure, but its flavour lacked the richness I’d been led to expect. Instead, I was rather left feeling that I’d been left with the fatty, even slightly sinewy bits around the edge of someone else’s steak.

Yes, it was tastier than your average fat, but didn’t set your mouth watering in nearly the same way as the Kansas version. And at over £10/oz your senses are primed for the carniverous equivalent of a white truffle. This pampered cow tasted in desperate need of some exercise.

The chips were spot on: thin, crispy and more-ish. The creamed spinach arrived with an egg perched on top, before being subjected to the sort of vigorous tableside shredding process usually only experienced by duck in a Chinese restaurant.

My Bearnaise sauce tasted freshly made and unctuously rich. So rich in fact that, combined with the fattiness of my Wagyu, a slightly herbier, more savoury version would have provided some welcome balance. 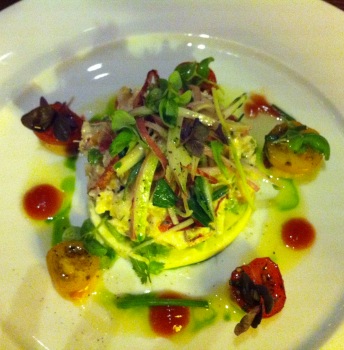 Meanwhile we kept up the comparison theme with the wine list: in the Californian corner, the Stag’s Leap “Artemis” Cabernet Sauvignon 2007; and for the Old World, St Emilion’s Château Faugères 2005.

The Bordeaux was showing the quality of its vintage with attractive fruit and elegantly structured tannins, but lacked the energy of the Stag’s Leap, whose silky cassis fruit and coffee notes were beautifully balanced, not overworked but immediately appealing with plenty of room to mature further.

We decided we could probably just about manage a pudding between us so shared the “caramilk” bar with blackberry and elderflower ice cream.

The elderflower was lost underneath intensely delicious blackberry fruit, while the caramilk allowed us to glide smoothly to the end of the meal.

Vanessa finished us off with a glass of red Moscato from Paso Robles: pure, sweet grape flavour with elderflower top notes, real freshness and a little bit of sophisticated grip on the finish.

Looking around us, the rest of the room was filled with the demographic which appears to be very much Cut’s target market: thirty something, private equity types, invariably male and often American, all enjoying that impeccable bordering on exhausting level of fine dining service.

In short, this is a place to impress clients rather than spend your own money – you’d be lucky to get out for under £100 a head.

That said, the cheaper steaks are superior, there’s more than enough to keep most people entertained on the by-the-glass list alone, and you can always go long on the grissini. Failing that, perhaps it’s time to start being nice to our banker friends again.