If the powers that be ever revise the Monopoly board, Northumberland Avenue would be unlikely to make the cut. 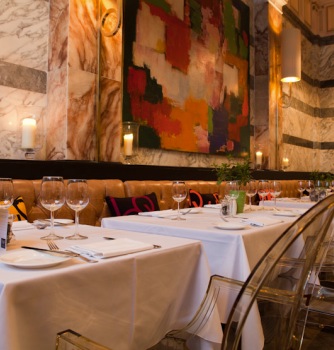 So central and yet so forgotten, it has somehow allowed itself to become overshadowed by the restaurants, theatres and bars that radiate from other corners of Trafalgar Square.

Nor does the prospect of a hotel restaurant immediately excite, which makes the reality of Boyd’s Brasserie rather a gem.

All marbled walls with oversized chandeliers and a gleaming bar, the restaurant first opened just over a year ago in a bit of a rush to feed the hotel clientele of 8 Northumberland Avenue. It has since relaunched with a more refined menu and layout over the summer.

Had we not felt duty bound to launch a proper assault on the menu of “simple and relaxed British-based food” we would have been very happy simply to have ordered one of each dish from the tapas-style starter selection.

In the end we limited ourselves to sampling just three. The smoked haddock Scotch egg was a well executed twist on the piggy original, although it could have done with a slightly more generous layer of fish.

The whitebait were lovely and crisp. It’s not their fault that they bear a worrying similarity to the fish used in that fashionable pedicure spa treatment, but I’ve started to feel slightly suspicious towards them recently. Until the scandal breaks however, let’s assume they feed on prime cuts of organic seaweed rather than Essex girls.

The mushrooms on toast were exactly what I would – indeed often do – feel like ordering during a trip abroad. As I’d hoped, Boyd’s took the dish a step above most people’s idea of home cooking, with a creamy sauce carrying the dish’s deep mushroomy flavour. It was only let down by the slightly soggy, barely toasted circle of white bread underneath.

Owner Charles Boyd left us to try a few wines made by the owners of (no relation) Château Boyd-Cantenac in Margaux. Particularly enjoyable was the 2006 Jacques Boyd. Here the ripe fruit on the nose translated into a classically styled, neatly balanced wine with fine tannins giving it structure but also a very approachable charm.

Noting the welcome inclusion of a small cluster of half bottles, we also ordered the Caves de Ribeauville Pinot Blanc 2009. Despite some attractive herbal notes, the fruit tasted a little flat and dilute, although a dip in the ice bucket enhanced its freshness nicely.

By the time we moved on to the main course, we’d pinned this place down as more of a club dining room than a hotel restaurant. The staff were too friendly, the food too confidently homely and the atmosphere too, well, atmospheric. 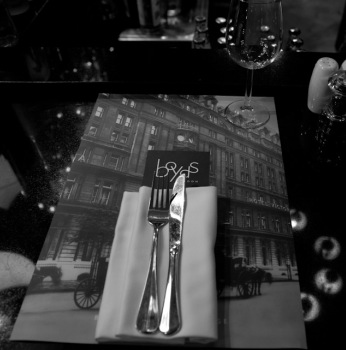 Despite the grandeur of our surroundings, the overall effect created by the food and service created a homely feel with a touch of old-fashioned, pre-war glamour.

Embracing the comfort food theme, we were almost charmed into ordering the fish pie and pint of Chablis for two, although I did succumb to the smaller version. It arrived neat but unassuming in its cast iron dish, accompanied by a separate bowl of peas. In my greedy efforts to clean both vessels thoroughly I did find them slightly awkward to manoeuvre a fork round. Apportion blame there where you will.

My friend tucked into a piece of ribeye steak, which he found perfectly tasty. However, with the stakes (excuse the pun) set so high in the last few years by specialists such as Hawksmoor, Gaucho, Goodman and JW Steakhouse, anyone splashing out these days on what is usually the most expensive item on a menu is likely to have – and expect – disproportionately high standards.

Thanks to the sensibly sized portions, we were both able to take a decent stab at pudding. I kept to the British comfort food approach which had proved so successful thus far and was not disappointed. The apple and blackberry crumble with custard on the side was a deliciously soothing bowlful of English autumn.

My friend went for the “duo of British cheeses”, which arrived neatly presented on a piece of slate accompanied by a colourful assortment of chutney, biscuits, celery and fruit. The cheeses themselves were fine but clearly playing it safe: a not-very-blue blue and a softish hard cheese.

Upon reflection, Northumberland Avenue and Boyd’s Brasserie are an ideal match. Both are easy to overlook amid more high profile neighbouring destinations, but provide a welcome, unassuming respite from the crowds swamping the guidebook hotspots.

If you’re just after a decent, honest meal rather than a full on “experience”, then it’s worth looking up Boyd’s Brasserie.